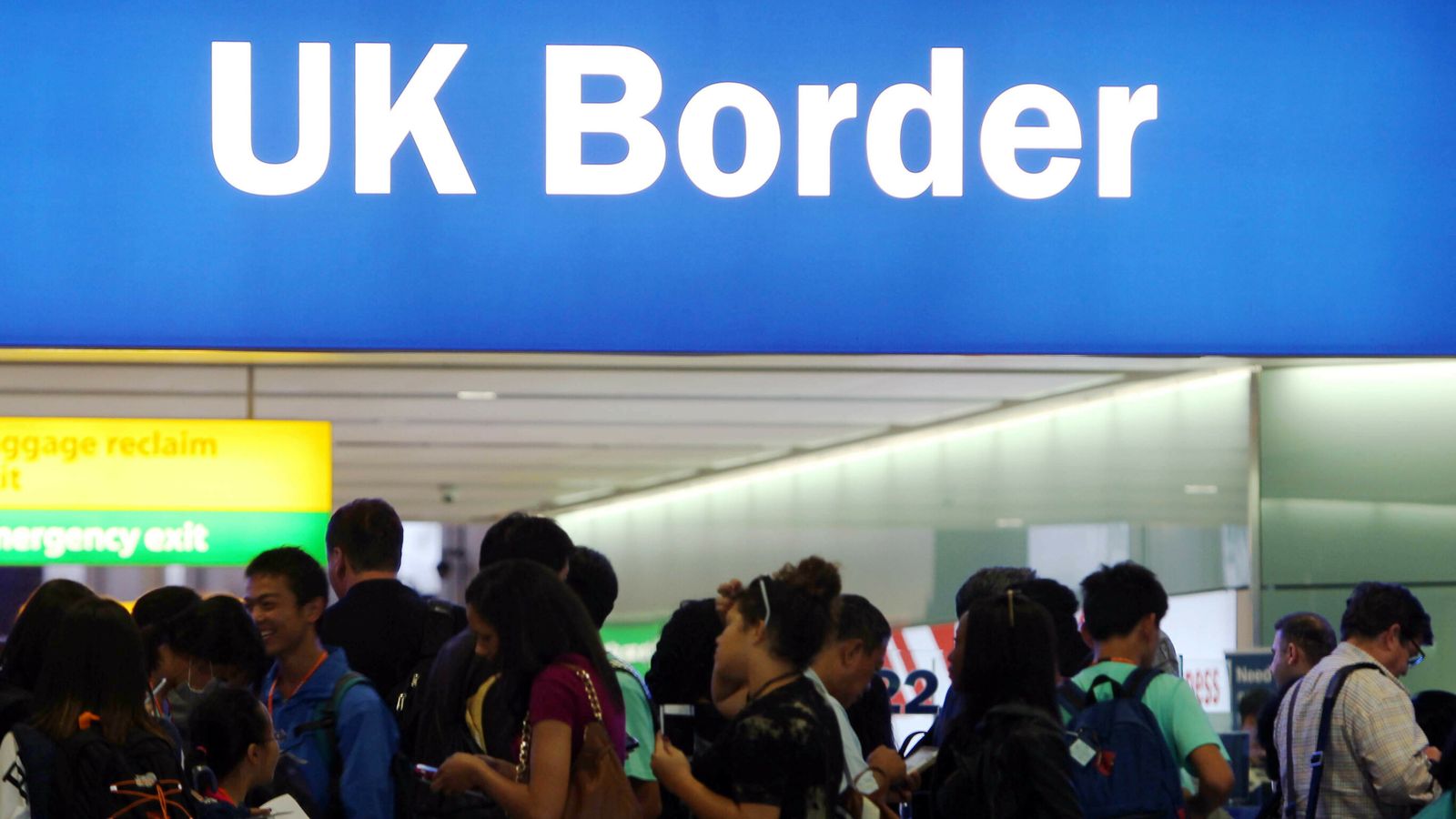 People should “think carefully” about going on holiday over the Christmas period after Border Force workers became the latest to announce they would go on strike, the home secretary has said.

Suella Braverman has urged people to rethink flying around the festive period as she warned of “undeniable, serious disruption for the many thousands who have holiday plans”.

“I really want to urge people who have got plans to travel abroad to think carefully about their plans because they may well be impacted,” she said.

“Ultimately, I’m not willing to compromise on security at the border – that’s the number one priority.

“So that may well have an adverse impact on convenience for people, frankly, whether it’s the time that they may have to wait for flights or departures.

“They may well be delayed on arrivals and various travel plans.

“Ultimately, security at the border is my number one non-negotiable priority.”

Border Force strikes will take place between 23rd and 26th December, and from 28th to 31st December, impacting Birmingham, Cardiff, Gatwick, Glasgow, Heathrow and Manchester airports, as well as the Port of Newhaven.

Manchester Airport has warned some cancellations are likely, while long queues at immigration are expected.

Downing Street has said anyone due to fly over the Christmas period should check with their airline for the latest information “because sadly there will be disruption”.

A spokesperson added that they were “not aware of any plans” to reduce border checks, adding: “Public safety is paramount”.

The Border Force walkouts join a raft of strikes that are set to hit festive travel, with industrial action organised by train, bus and road workers in the run up to Christmas and throughout the holiday season.

The boss of the rail union has accused the government of “sabotaging” negotiations aimed at stopping the disruption.

Mick Lynch, the general secretary of the RMT, told Sky News that ministers have “torpedoed” talks between train operating companies and workers taking industrial action over pay and conditions.

Mr Lynch said that after months of negotiations, rail companies had put together a document and a set of pay scales they wanted the RMT to consider “and we would have done that”.

“But at the last moment, including last night around about six o’clock, the government decided that they would not allow the railway companies to make that offer and instead instructed them to prepare for the strike,” he said.

Mr Lynch said while the government is claiming it wants to facilitate negotiations it has become “absolutely clear that they’re not prepared do that”.

“In fact, they sabotaged and sunk the negotiations just as they were reaching the point of conclusion,” he said.

He accused Transport Secretary Mark Harper of “obstructing talks” and also pointed the finger at Business Secretary Grant Shapps, as well as the Treasury.

“I meet with the most senior people on the railway and I’m on the phone to them constantly. They are telling me they’ve got a document ready to go.

Mr Lynch said driver only operation trains have been put back on the table even though that is something they know unions “will never accept”. 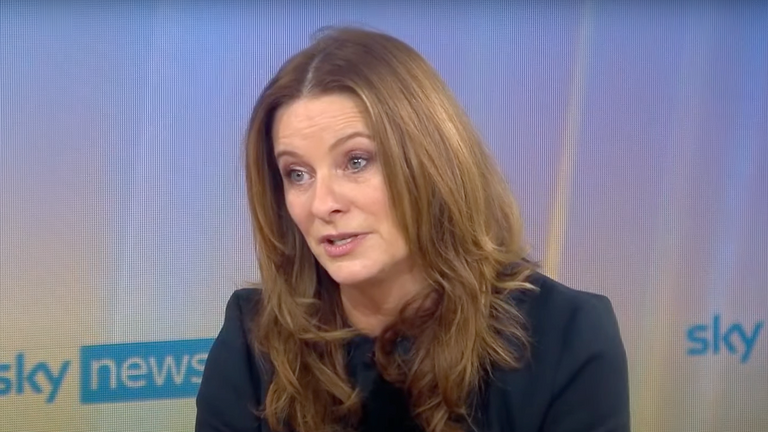 The picket lines are not limited to transport, with teachers, nurses and ambulance workers among others from the public sector taking action over pay and conditions.

The government has been criticised for failing to stop the strikes, with Union bosses accusing ministers of stonewalling requests for meaningful pay talks.

Gillian Keegan, the education secretary, told Sky News that the strikes were “disappointing” but giving in to the union’s demands would cost the taxpayer £28bn and “you can’t spend your way out of inflation”.

She said “we do expect there will be disruption and delays”, following warnings about flight cancellations.

But she said 2,000 soldiers would be drafted in to help with Border Force roles and “we should be extremely grateful to them”.

With only one day left in December when there are no strikes – the 12th – it was put to the cabinet minister that general strikes bring down governments, as seen in the 1970s.

Ms Keegan said: “Well, I mean, that has happened in history for sure.”

However, she insisted the government was taking a “sensible and balanced” approach by not interfering in the pay negotiations, saying the disputes were between “unions and the paymasters”.

Government ‘failing to get a grip’

Unions are demanding pay rises above or in line with inflation as the UK is gripped by a recession and the cost of living rises.

Read More:
Which sectors are striking and why? 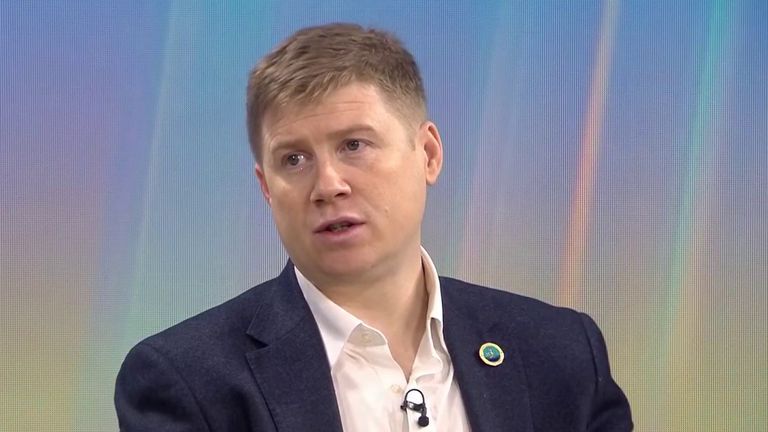 Labour’s shadow chief secretary to the Treasury, Pat McFadden said the government is “failing to get a grip” on the strikes by refusing to join the negotiations

He added: “Even when we don’t have strikes, public services are not working properly, I can scarcely think of a public service in this country that works better after 12 years of Conservative government than what before they came into office.

“That is a damning indictment of their period of stewardship.” 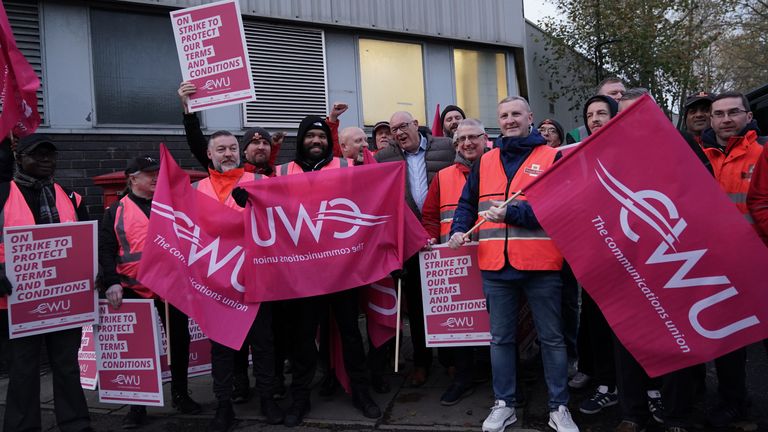 Prime Minister Rishi Sunak has promised “tough” new laws to limit the impact of strike action, and has not ruled out banning strikes in the emergency services.

But Sharon Graham, general secretary of the Unite union, told the PM on Wednesday “we are ready industrially and financially” to challenge any new measures.

In a joint letter to Chancellor Jeremy Hunt, union heads accused ministers of “ignoring the main issue on the table” that is causing the strikes – public sector pay.

Highlighting “huge” pay cuts public sector workers have suffered, the union leaders warned: “With CPI inflation over 11% and RPI inflation above 14%, frontline workers are facing another massive real-terms hit to their wages.

“Nurses, ambulance staff, teachers and millions of other key workers have already seen their living standards decimated with over a decade of pay cuts and wage freezes.

“Nurses today are earning £5,000 a year less in real terms than they were in 2010 and hospitals and schools are having to set up food banks for staff. This cannot go on.”