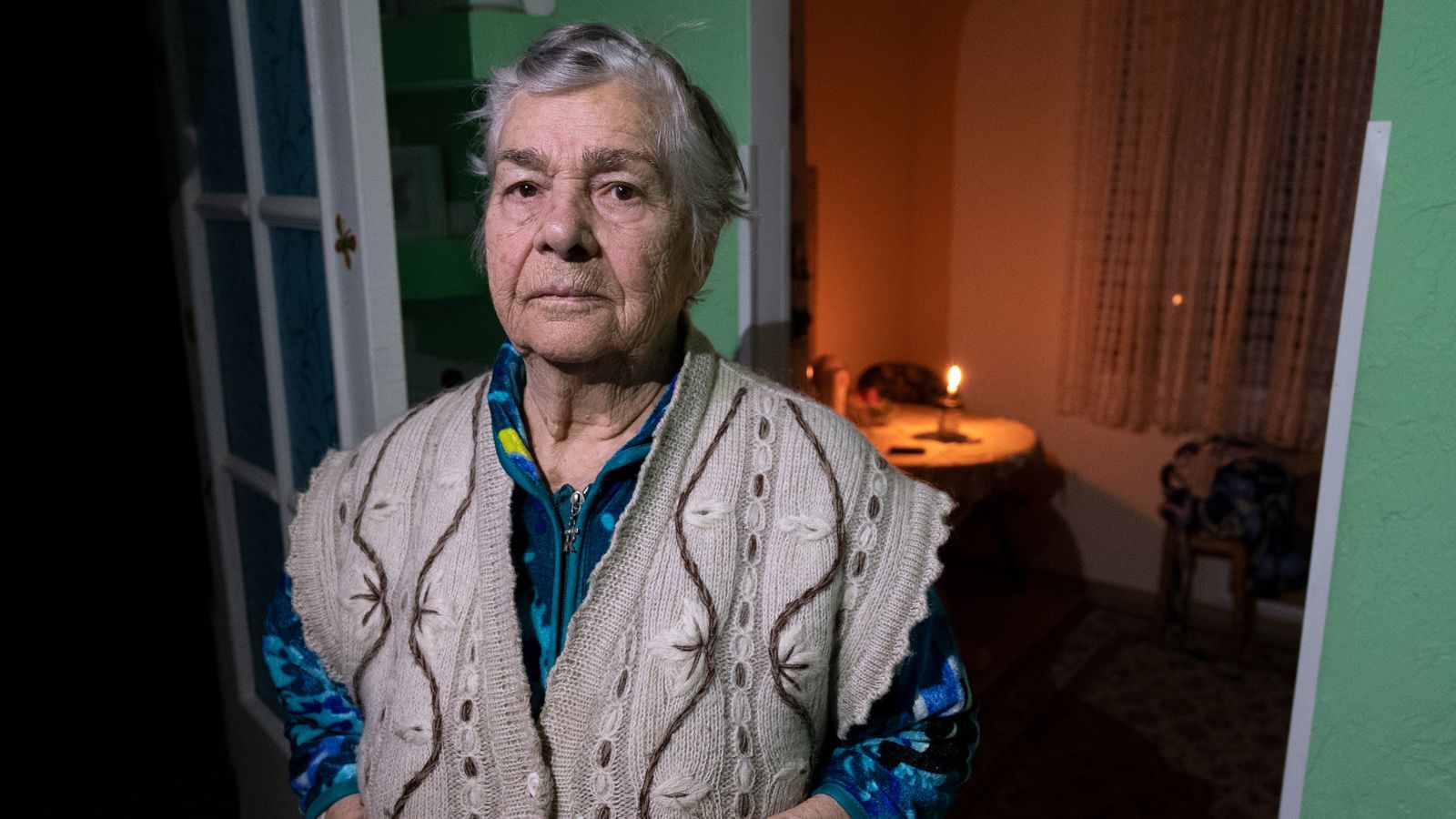 In the flicker of candlelight, a 91-year-old grandmother says she is scared as night falls, plunging her apartment block in Kyiv once more into darkness.

Anna Abrosimova fell over during a blackout this week, hurting her legs. She is too frail to move somewhere safer.

“I am living in a nightmare,” she said, standing in the hallway of her neat, tidy, first-floor flat.

Russian missile strikes against Ukraine‘s power and water supplies have turned people’s homes, like hers, into a new frontline as Vladimir Putin tries to crush their will to resist.

But Anna, who lives with her adult granddaughter, said she is determined to survive.

She has stored bottles of water in her hallway and wrapped pots of soup up in blankets to keep them warm.

Standing next to a wall decoration that says in English “Love – Happy – Joy”, she said: “I urgently want to live to see the victory and to see how it’s all over.

“But it is almost one year since that bandit [Putin] started a war against us. Does he have no shame?”

She said her husband of 59 years, who died more than a decade ago, was Russian.

“We [Ukraine and Russia] used to be together [in the Soviet Union]… Putin came to power and what is he doing now? He wants Ukraine. We will not allow him. If I was younger, I would go and fight.”

Anna said the suffering unleashed by Russia’s invasion was even harsher than the horrors her country endured during the Second World War, when she was a child.

“They are worse than Hitler. Hitler – God forgive me for saying this – was a stranger but they [the Russians] are like our own people,” she said.

“In the Second World War it was hard, my father was killed, leaving just me, my younger brother and my mother. It was tough, but not as now. My nerves are shredded.”

Anna said there had been power outages at specific times in the wake of Russia’s full-scale war on 24 February but in recent weeks it has become much worse and unpredictable.

Her granddaughter works during the day. If there is no power, she is unable to return home.

Russian forces have smashed energy and water infrastructure in waves of deliberate strikes in a tactic that seems designed to try to crush Ukraine’s will to resist as winter draws in.

“Of course I’m worried. I wish I had electricity,” Anna said. “It is hard but I don’t want to die. I wish to wait for the peace.”

In another apartment nearby, a young mother and her two children, five-year-old Viktor and two-year-old Anna, are also having to adapt to this new, harsher reality of power and water outages on top of the threat of missile strikes.

They too had no electricity or running water on Wednesday and Thursday but services returned in their block on Friday.

“When you have no electricity, you feel like you can adapt,” said Myroslava Babchenko, 32, sitting in her children’s bedroom, which doubles up as a playroom.

“But when the water disappeared and we lost all amenities, it became very uncomfortable. Also, when you have little children, you constantly want to wash their hands and be clean, it’s very hard.”

She resorted to melting some of the year’s first snow this week to create at least water that was suitable for washing.

Myroslava said she wanted to stay with her family in Kyiv but if conditions become much worse then she will move to a holiday home outside the capital that they own.

“My brother is on the frontline. He says we shouldn’t be sad and that we need to enjoy life, because they are there for us to be happy,” she said, watching her daughter toddle around, batting a red, heart shaped balloon.

“I don’t think of myself as a soldier but… We have a phrase in Ukraine: ‘What is your power? I’m Ukrainian…’ and I feel proud of that.”