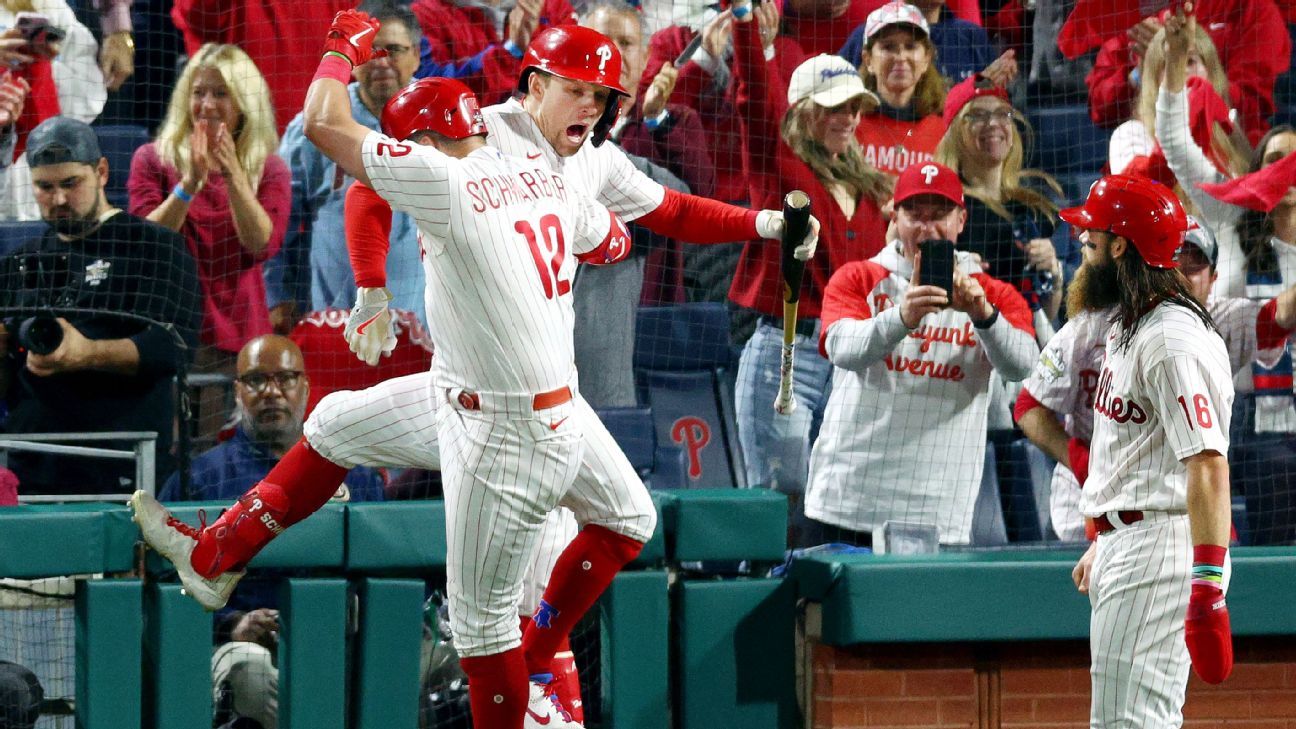 PHILADELPHIA — The Philadelphia Phillies tied the record for most home runs hit in a World Series game, belting five in a 7-0 win over the Houston Astros in Game 3 on Tuesday night.

All five home runs came off starter Lance McCullers Jr., a record for most homers surrendered by a pitcher in a World Series game.

Familiarity was a key to Philadelphia’s offensive output.

“He’s a guy that we saw at the end of the year in Houston,” catcher J.T. Realmuto said after the win. “Got to see his pitches then. He just left pitches in the middle of the plate today.”

The Astros hosted the Phillies in the final days of the regular season when McCullers gave up one run over six innings. Tuesday had an entirely different outcome. Bryce Harper (first inning), Alec Bohm (second), Brandon Marsh (second), Kyle Schwarber (fifth) and Rhys Hoskins (fifth) all went deep, making the Phillies the first team in history to hit five home runs in the first five innings of a World Series game.

Before Bohm’s second-inning homer, Harper called him over from the on-deck circle to the dugout and offered him a quick word of advice.

Asked if he and Bohm discussed McCullers possibly tipping his pitches, Harper said, “I think that’s just general conversation. Trying to get as much information as we can from each other. We just tried to have the best at-bats we could.”

Bohm smiled when asked what Harper told him.

“That’s between us,” he said in a mid-game interview during the Fox broadcast.

Bohm remained coy when he was asked afterward if Harper’s words helped him in his at-bat.

“Maybe,” he said with another smile.

Schwarber’s and Hoskins’ homers were back-to-back, with Schwarber’s blast — a 443-foot shot to dead center — traveling the farthest. Philadelphia hit home runs off four types of pitches, including two sliders, a change-up, a curveball and a sinker. Before Tuesday, McCullers hadn’t given up a single home run on 651 off-speed pitches thrown this season (regular season and playoffs).

“Listen, I am who I am,” McCullers said. “I’m going to throw a lot of off-speed. Everyone knows that.”

Again, Phillies hitters attributed their success to knowing what McCullers’ pitches looked like over knowing what was coming.

“Pitch shape,” Hoskins said. “And what each pitch does. What it looks like to the eye for right-handed vs left-handed hitters. We did a great job tonight.”

Coming into the game, McCullers had given up just three earned runs in 11 postseason innings this month. He was pulled after the fifth home run, lasting only 4 1/3 innings, giving up all seven runs. He allowed just four home runs in eight regular-season starts this season.

All that power at the plate backed Phillies starter Ranger Suarez, who threw five shutout innings, giving up just three hits and a walk. Suarez’s stuff was excellent as was the raucous Philadelphia crowd, an ongoing topic at home games, in which the Phillies are 6-0 this postseason.

“The sinker worked excellent tonight,” Suarez said through an interpreter. “It had real good movement. My cutter and my changeup were really good, too. I induced a lot of grounders with those pitches.

“To touch on the fans, they were excellent tonight, as always. They definitely gave me a plus. They inject that energy that you don’t get anywhere else.”

Suarez had the crowd on its feet on several two-strike pitches, but it was Harper who ignited the early fireworks with his first-inning blast to right field. He is hitting .382 this postseason after hitting his sixth home run during the playoffs.

The Phillies have 17 homers at home this postseason, third-most in a single postseason all time. They have a 2-1 lead in the best-of-seven series heading into Game 4 on Wednesday.