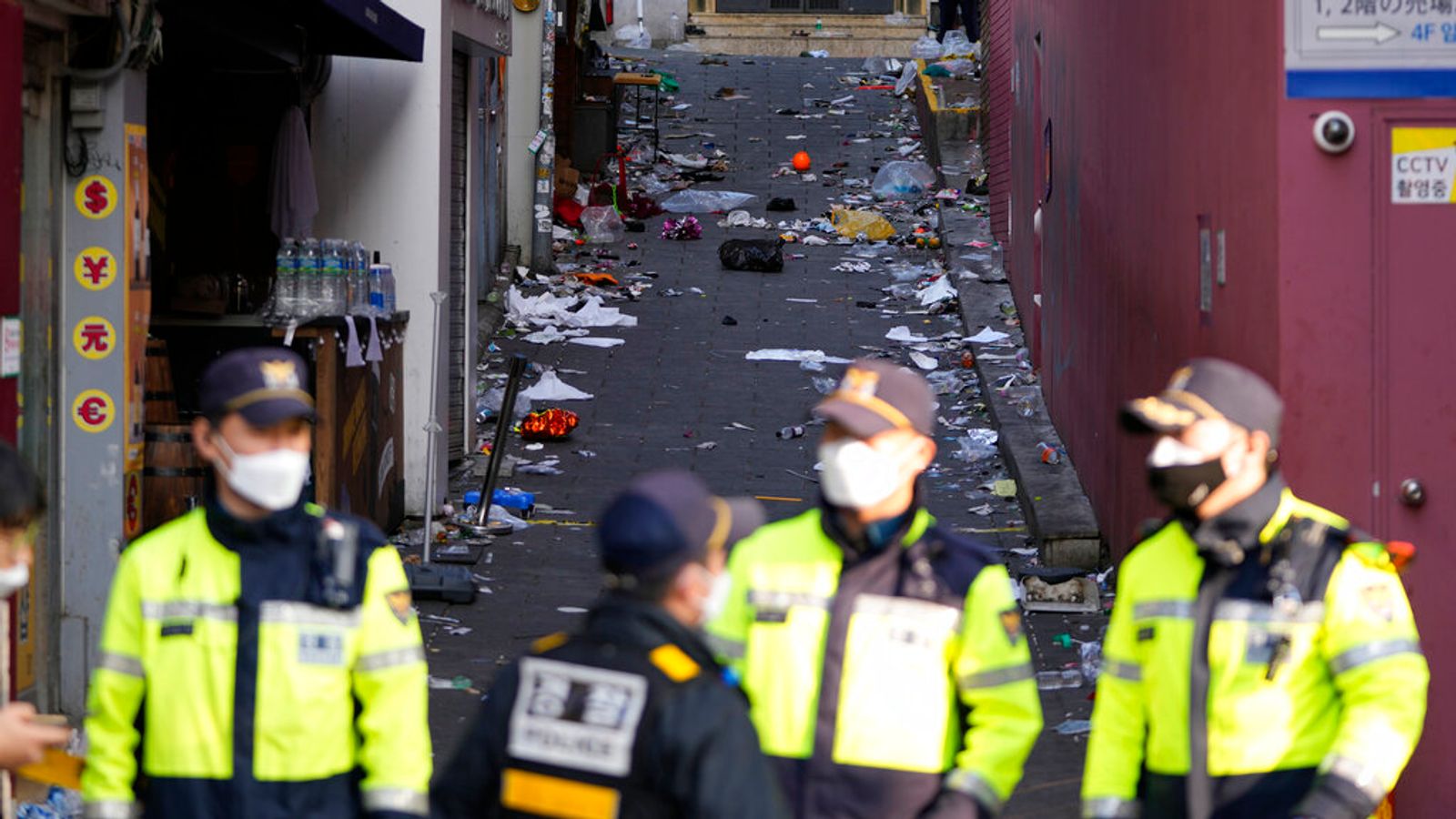 South Korea’s president has declared a national period of mourning over a stampede during Halloween festivities – as the number of deaths has risen to 151.

President Yoon Suk-yeol expressed condolences to the victims and wished for a speedy recovery for the injured in a statement on Sunday, before visiting the scene of the crowd crush.

“This is truly tragic,” he said. “A tragedy and disaster that should not have happened took place in the heart of Seoul last night.”

South Korean media reported that a total of 151 people were killed in the crowd crush in a packed nightlife area in Seoul on Saturday night, while at least 82 were injured.

Choi Seong-beom, chief of Seoul’s Yongsan fire department, said the number of deaths could rise and that an unspecified number of the injured were in critical condition – with at least 50 people being treated for cardiac arrest.

The victims were crushed by a large crowd pushing forward on a narrow street during Halloween celebrations near the Hamilton Hotel in the Itaewon area.

Most of the bodies have been sent to hospitals, while the rest are being taken to a nearby gym so that they can be identified, he added.

A fire official said most of the dead are in their teens and 20s, and that 19 of the injured are in serious condition, according to Reuters news agency.

Footage on social media showed many victims lying on the pavement as workers from the emergency services and bystanders performed CPR in an effort to revive them.

All available emergency services personnel in Seoul were deployed to the streets to treat the injured following the stampede – with the National Fire Agency saying more than 1,700 responders attended the scene.

It is unclear what prompted the crowd surge, although some local media reports said a large number of people had rushed to the area after hearing an unidentified celebrity had been there.

Read more: What we know so far about the South Korea crowd crush that left dozens dead

He said in a statement that officials should ensure swift treatment for those injured and that the safety of festivity sites should be reviewed.

Local media said around 100,000 people headed to Itaewon for the Halloween festivities, which were the biggest in years following the easing of COVID-19 restrictions in recent months.

Several world leaders have sent their condolences to South Korea, with US President Joe Biden saying: “Jill and I send our deepest condolences to the families who lost loved ones in Seoul. We grieve with the people of the Republic of Korea and send our best wishes for a quick recovery to all those who were injured.

“The Alliance between our two countries has never been more vibrant or more vital – and the ties between our people are
stronger than ever. The United States stands with the Republic of Korea during this tragic time.”

UK Prime Minister Rishi Sunak described the news as “horrific”, adding: “All our thoughts are with those currently responding and all South Koreans at this very distressing time.”

While Canadian Prime Minister Justin Trudeau said he was “thinking of everyone affected by this tragedy, and wishing a fast and full recovery to those who were injured”.