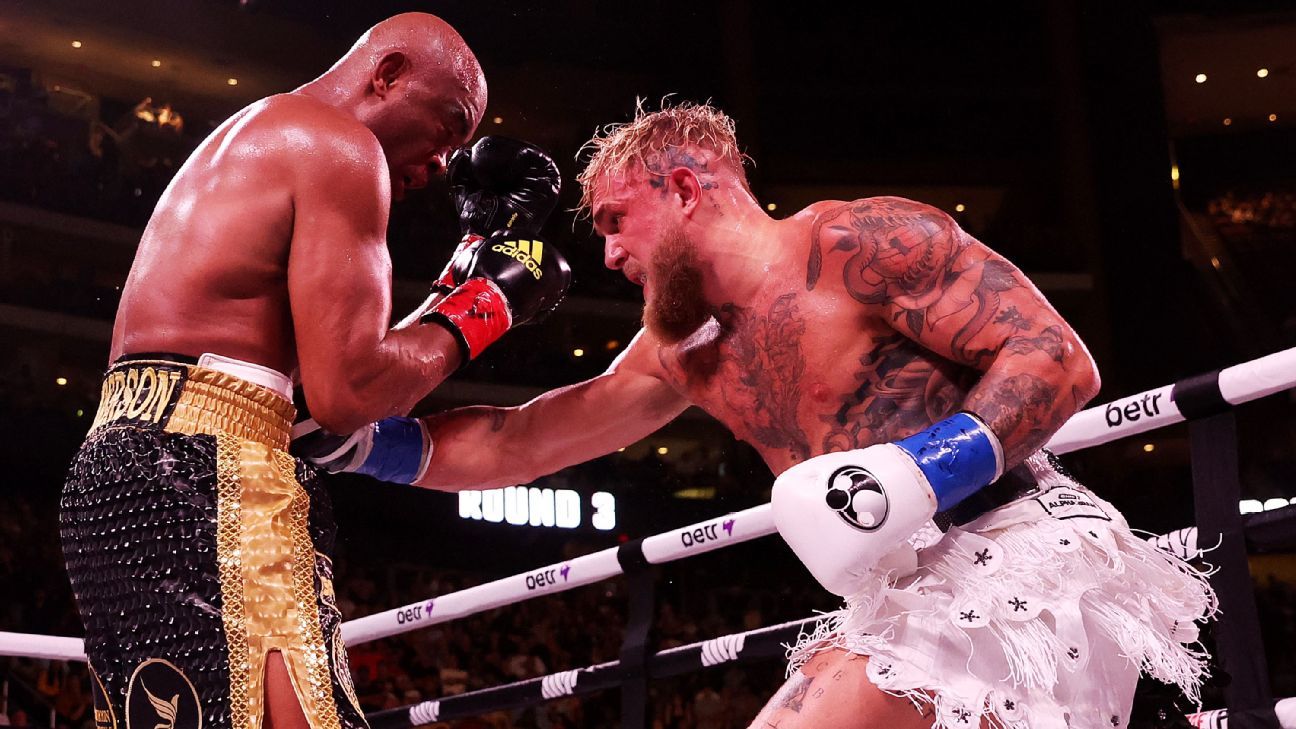 GLENDALE, Ariz. — Jake Paul’s inexplicable boxing résumé now includes a win over one of the greatest MMA fighters of all time.

Paul, the YouTube-star-turned-prizefighter, beat former longtime UFC middleweight champion Anderson Silva by unanimous decision (77-74, 78-73, 78-73) Saturday night at Desert Diamond Arena. The bout was very competitive, but Paul pulled away late and sealed the victory by dropping Silva in the eighth round with a right hand.

Paul described beating Silva, someone he was a big fan of as a kid, as “surreal.”

“He was my idol growing up,” Paul said. “He inspired me to be great.”

This was the toughest matchup so far for Paul, the 25-year-old social media maven. Silva is 47 years old, but he had solid boxing performances, including a win over former world champion Julio Cesar Chavez Jr., after leaving the UFC in 2020.

Afterward, Paul called out another UFC luminary: Nate Diaz, who was in attendance supporting his teammate Chris Avila, who competed on the undercard. Diaz and his team and members of Paul’s team had an altercation backstage with drinks flying in both directions earlier in the evening. Diaz became a free agent after his fight last month at UFC 279.

Silva started strong with some vintage “Spider” moments, including dropping his hands and egging Paul on in the second round. Silva threw a lot of good combinations, but Paul took many on his gloves.

The middle rounds were very tight with Silva getting a brief second wind. Paul landed hard shots in the late rounds as Silva was clearly tired. And in the eighth, Paul clipped Silva with a right, dropping him, at the end of a combination.

“Jake was better than me today,” said Silva, who is now 3-2 as a pro boxer. “I have nothing bad to say about my opponent.”

Judges Dennis O’Connell and Chris Wilson both scored the bout 78-73 for Paul, and judge Paul Calderon scored it 77-74 for Paul.

“I’m a superhero, but sometimes my half-human fails,” Silva said.

Paul and Silva agreed to a bet at Thursday’s news conference. If Silva won, Paul would do a rematch with him in kickboxing. If Paul won, which he did, Silva would help Paul start an association for MMA fighters to aid them in getting paid more and getting better healthcare. Silva, Paul proposed, would be the interim president of that association.

“Now we’re gonna band together and create a united fighters association to help UFC fighters, all MMA fighters and boxers to get more pay and long-term healthcare,” Paul said. “That’s a big undertaking that I’ve been wanting to do since the beginning of my career.”

Paul’s move into boxing doesn’t seem to be slowing down any time soon. And now the polarizing pugilist has a win over a combat sports icon on his record, to boot, albeit one well past his prime.

The end goal, Paul said, is to become a world champion in boxing one day. He also called out Canelo Alvarez immediately after beating Silva.

“This definitely moves me in that direction,” Paul said. “[Silva] is insanely tough. Insanely tough. It’s just great experience under my belt. And like I said, it’s only been 2½ years. Who knows what I can accomplish? I know, but I’ll let you guys find out.”

“This is the toughest sport in the world, and I give you so much props,” Hall said of Bell in his postfight interview. “I’m proud of you, man. … He definitely surprised me. He’s pretty good.”

Bell, 30, knocked out fellow former NFL running back Adrian Peterson in an exhibition bout last month. Bell, an Ohio native, is a former All-Pro and Pro Bowl running back for the Pittsburgh Steelers, among other teams.

Hall, a 38-year-old Jamaican-born fighter who lives and trains in Dallas, is tied for the most knockouts in UFC middleweight history with eight. He retired from the UFC in August.

After his bout, Hall called out Paul for a fight.

“I’m the dude that’s gonna come out here and expose him,” Hall said. “If Anderson doesn’t do it, I’m gonna be the one to f— you up.”