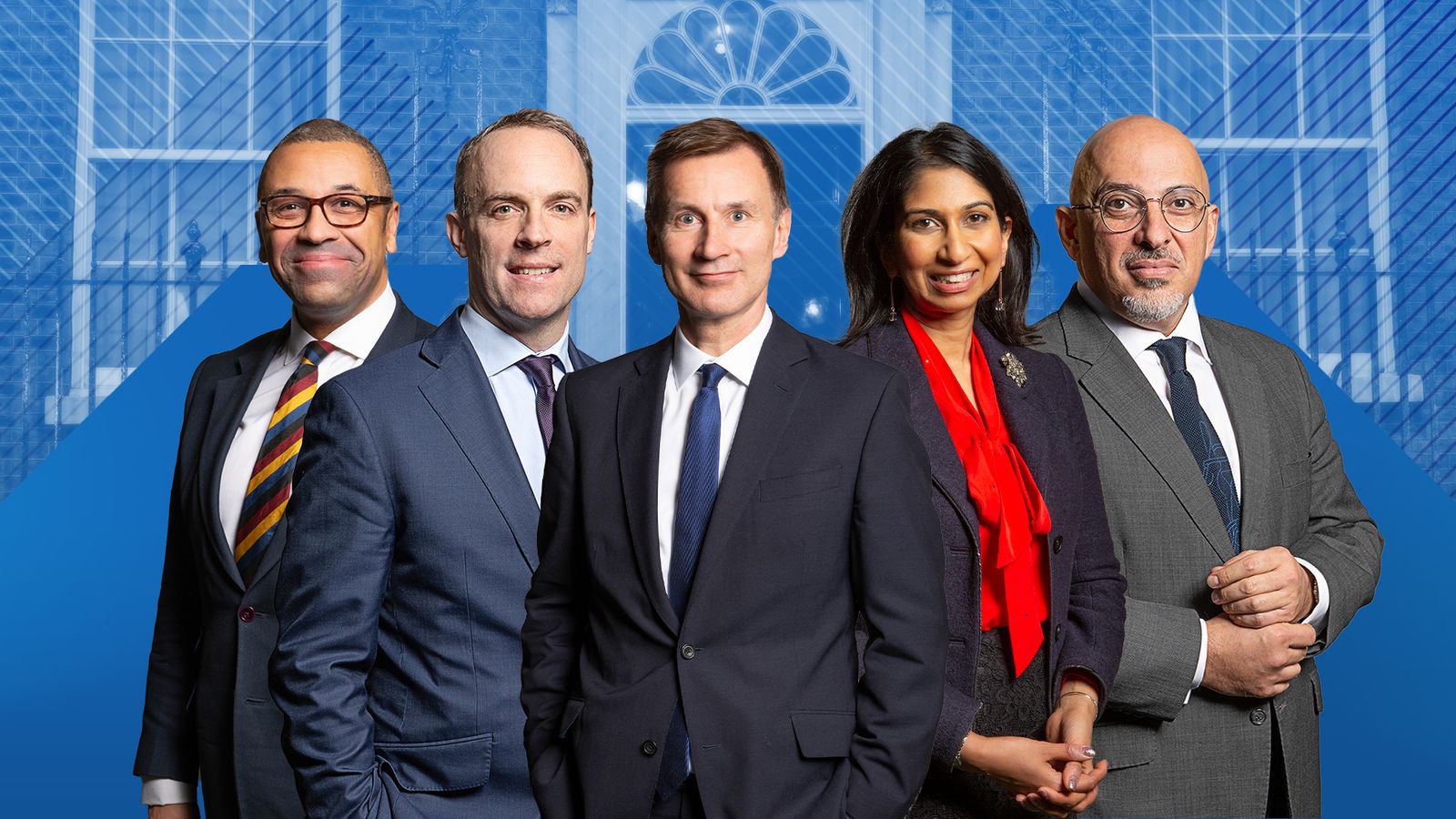 Rishi Sunak has started to appoint his cabinet after being officially asked by the King to form a new government.

The new prime minister has promised to form a government of “all the talents” amid calls from senior Tories to appoint the best ministers available – rather than focusing on those who are loyal to him, as his two predecessors had done.

Here’s who is in and out of Mr Sunak’s new government:

Jeremy Hunt is keeping his job as chancellor, having reversed the majority of Liz Truss’s mini-budget Mr Sunak warned would be detrimental to the economy just over a week ago.

Seen as a steady hand, keeping Mr Hunt could be an attempt to reassure the markets.

Mr Hunt is due to lay out plans for balancing the books with a fiscal statement on 31 October.

His appointment could also be seen as political, as Mr Hunt had backed Mr Sunak in the last two leadership races.

Suella Braverman is back as home secretary – less than a week she quit for breaching the ministerial code by sending classified documents from her personal email.

Her shock resignation came the day before Ms Truss followed her out of the door, and in an explosive letter to the former PM, she expressed “concerns about the direction of this government”, including its commitment to reducing immigration.

Ms Braverman has taken a tough stance on small boat crossings, and previously said it was her “dream” to see the controversial Rwanda deportation flights take off.

One of her most notable speeches during her short time as home secretary under Ms Truss was when she blamed protest disruption on the “tofu-eating wokerati”.

“It’s the Labour party, it’s the Lib Dems, it’s the coalition of chaos, it’s the Guardian-reading tofu-eating wokerati – dare I say, the anti-growth coalition – that we have to thank for the disruption we are seeing on our roads today,” she said.

From the right wing of the party, the former attorney general was not a natural Rishi Sunak supporter, announcing her backing of him late on Sunday, so her appointment will be seen as trying to keep all wings of the party onboard.

Grant Shapps, who was drafted in to replace Ms Braverman, has been appointed as business secretary.

The Rishi Sunak ally has a wealth of experience in cabinet, having served as transport secretary under Boris Johnson.

Dominic Raab has been appointed deputy PM and justice secretary,

The loyal supporter of Mr Sunak has been handed his old jobs back, having held these roles for under Boris Johnson.

When the former prime minister was in hospital with COVID it was Mr Raab who took on the running of the country.

However, he was demoted from foreign secretary to justice secretary last September following criticism of his handling of the Afghanistan withdrawal.

During the leadership race to replace Mr Johnson, Mr Raab had called Ms Truss’s tax plans “electoral suicide” – so it was no surprise when he returned to the backbenches during her brief premiership.

Now that he has returned to his former post, one of the most pressing challenges he faces is reducing backlogs in the courts.

James Cleverly has been reappointed to foreign secretary.

He is the first Liz Truss backer to stay in post under the new prime minister, in what could be seen as a show of unity following months of divisive politics within the Conservative Party.

After Ms Truss resigned, Mr Cleverly initially came out in support of Boris Johnson’s return to the top job.

A popular MP across the party and former Welsh secretary, he is a good communicator so a natural for the job.

The chief whip is in charge of party discipline, telling Tory MPs how they should vote in certain votes.

Although he backed Boris Johnson’s leadership bid, Ben Wallace has kept his job as defence secretary.

He is one of the few cabinet secretaries to keep their job during both Mr Johnson and Ms Truss’s premierships – and now Mr Sunak.

It was not a given Mr Wallace would accept the job as Mr Sunak has not publicly committed to spending 3% of GDP on defence by 2030.

Mr Wallace had said that was a red line for him and would quit if that pledge by Liz Truss was not kept to.

Mr Zahawi was chancellor for a short period under Boris Johnson after Mr Sunak resigned – and famously called on the ex-PM to quit days after accepting the top cabinet job.

He also served as a vaccines minister and education secretary under Mr Johnson, and he was the made Chancellor of the Duchy of Lancaster under Ms Truss.

His appointment as chairman may come as a surprise, as he had backed Mr Johnson to return as prime minister during the last leadership race just weeks after calling for him to go.

After Mr Johnson withdrew from the race, he voiced support for Mr Sunak.

His new role will see him attend cabinet meetings but he will not have a department.

Rishi Sunak’s closest political friend has been given the important role of running the Cabinet Office.

He will be Mr Sunak’s ears and eyes in the Cabinet Office, which supports the PM and the cabinet, and ensures the effective running of government.

Ahead of Mr Sunak announcing his key posts, a number of Liz Truss’s cabinet have already announced they are leaving government.

Jacob Rees-Mogg kicked off the resignations on Tuesday, leaving his post as business secretary.

A close ally of both Boris Johnson and Ms Truss, he had earlier said he was not expecting to serve in Mr Sunak’s cabinet.

Mr Rees-Mogg famously called Mr Sunak a “socialist” during this summer’s Conservative Party leadership race because he refused to commit to the same level of tax cuts as Ms Truss – though today he backed down on those comments.

In his resignation letter, he wished Mr Sunak “every success” but added: “It is time to go.

“In the interests of the nation, the Conservative Party must unite under your leadership and I shall do all I can to support you.”

Brandon Lewis, has also resigned as justice secretary, saying Mr Sunak has his “support from the backbenches”.

“Our party is at a crossroads,” Mr Lewis said in his resignation letter to the prime minister, adding that it is time to “reunite and rebuild”.

Robert Buckland is out as Welsh secretary, writing on Twitter that he was leaving “at my request”.

Mr Buckland initially supported Mr Sunak in the summer, but swapped to back Ms Truss.

Jake Berry said it was an “honour” to serve as Conservative Party chairman but “all good things must come to an end”.

The Truss-backing MP for Rossendale and Darwen said he will “relish” his chance to serve his constituents again.

Kit Malthouse, the fourth education secretary this year, tweeted: “As I leave the DfE, I do so with profound gratitude to officials, my private office team, and brilliant advisers, who all worked so hard.

“I hope my successor can harness their commitment to the most important mission in Whitehall: the future and welfare of our children.”

Chole Smith is also out as secretary of state for work and pensions. She was a big ally of Ms Truss, and had been reviewing whether to uprate benefits in line with inflation.

Ranil Jayawardena is also out as environment secretary.

He wrote to Rishi Sunak: “I know that you wish for a new team to join you in HM government, so I write to stand aside.”

He added that he is “sure that HM Government will continue to deliver, and you will have my support in doing so”.

Levelling Up Secretary Simon Clarke has also left his role.

He said it was a “great privilege” to serve in the department, as well as in his previous role as chief secretary to the Treasury.

Mr Clarke was one of Liz Truss’s most vocal supporters during the summer.

He tweeted: “My loyalty to @trussliz and @BorisJohnson was sincere to the last and I appreciate deeply the opportunity they gave me. But I meant every word that I said yesterday: @Conservatives must unite under our new PM and should all work to ensure @RishiSunak succeeds. He has my support.”

Chief Whip Wendy Morton has also left the government, writing on Twitter that she is “heading to the backbenches”.

Her exit is perhaps unsurprising, as Ms Morton presided over a chaotic parliamentary party under Ms Truss’s premiership.

Her short time in the role culminated in farcical scenes during a Commons vote on fracking the night before Ms Truss announced her resignation, with claims of MPs being “bullied” into voting with the government.

She added: “I think that Rishi will make a very good government from all different parts of the party.

“Some of us need to move on in order to make sure he’s got room to bring in some really good talent from all across the party.”

Alok Sharma has departed as minister of state at the cabinet office. He will remain COP26 president and will negotiate on behalf of the UK at COP27.

Toothless USA eliminated as Netherlands expose talent gap
Breaking down the trilogies: Who has the edge in Fury-Chisora and Chocolatito-Estrada?
Amber Heard files appeal against Johnny Depp libel trial verdict
Ukrainians fight Russian mercenaries and plummeting temperatures in the Battle for Bakhmut
Microsoft says it will bring Call of Duty to Nintendo for 10 years if Activision deal closes