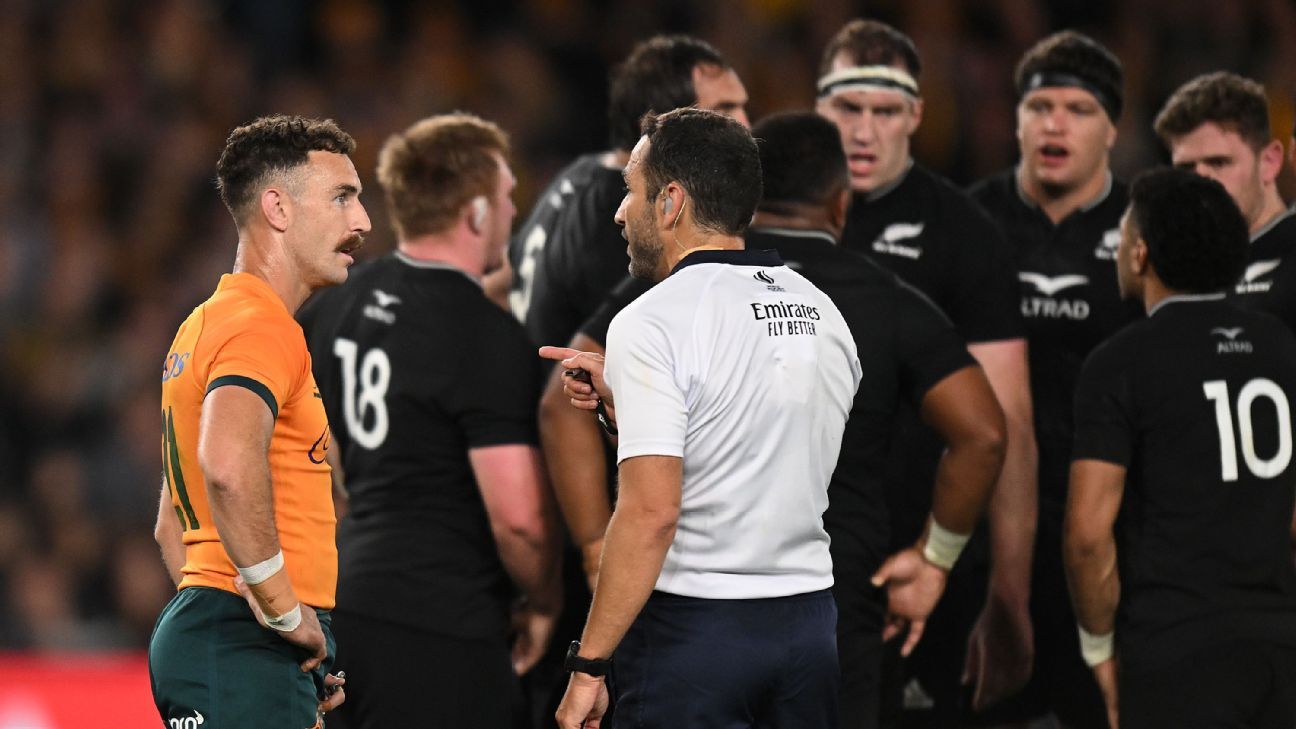 There is no other word to describe what happened at Marvel Stadium in Melbourne on Thursday night as one of the most thrilling Bledisloe Cup Test matches ever staged descended into near farcical scenes — and the All Blacks broke Wallaby hearts after the final siren.

Even before French referee Matthieu Raynal’s decision to ping Bernard Foley for time-wasting there was a truckload of different incidents to examine.

But it will be that call that becomes part of Bledisloe Cup folklore and means Australia must swallow their trans-Tasman drought extending into a 20th year.

It finished 39-37 in Melbourne. And there is no other place to start then that call.

Having produced one of the finest comebacks in Bledisloe memory, and then already once denied the All Blacks a potentially match-winning try through brilliant work at the breakdown from Lalakai Foketi, the Wallabies were left stunned when Raynal awarded a scrum to New Zealand right beneath Australia’s sticks.

Despite the protestations of Nic White, who had only a couple of minutes earlier kicked his side in the lead for the first time with a booming 49-metre penalty that sailed between the uprights, the All Blacks had one last chance to avoid defeat in a game they should never have been in danger of losing.

And, thanks to Jordie Barrett, they would not.

Raynal’s decision will be debated for decades to come, but he had in fact warned Foley. With the Australian moving in to take his penalty kick for line, Foketi screaming in the background to do so, it was then that Raynal pinged Foley.

It was the right call if you were wearing black, and absolutely unbelievable for those in gold.

“I spoke to Bernard after the game, he was under the impression time was off,” Wallabies coach Rennie said of the incident post match.

“The referee had told him to play and at no stage was he told or did he believe he was going to call a scrum from that.

“Most situations the clock is off and the clock stays off, so it sounds like the clock went off and then he started it again. As we know, a team scores a try late and you take your time getting back to halfway and they stop the clock and wait until you kick off.

“The disappointing thing from our point of view is it was a fantastic game of footy and we should be celebrating the game as opposed to talking about a ref decision in the last minute.”

“I understand there is a contentious nature about it but it was very clear cut from the opposition. The other one that wasn’t clear cut was when Kellaway and the TMO wanted to look at what was a very suspicious forward pass and yet the conversion was allowed to be taken.”

What there was no doubt about was that the 53,245 fans in attended were treated to an absorbing contest that suggests that while the trophy is locked away for another year, there is not too much between these two teams.

To start with, the Wallabies had one phase of attack inside the first 10 minutes, and that was only after they bottled the kick-off and Andrew Kellaway was dragged into touch.

That allowed the All Blacks to get off to the dream start as they built an early 10-0 lead through powerhouse hooker Samisoni Taukei’aho, who finished with two tries and fumbled another, and was a deserved winner of the man-of-the-match award.

But the Wallabies rallied, as they did time and time again throughout the 80 minutes, to steady the ship. It did however take longer than it should have, as Kellaway failed to plant the ball down under the desperate tackle attempt of Rieko Ioane and Richie Mo’unga.

The kicker? That Kellaway had opted not to pass to an unmarked Tom Wright outside him.

They did eventually strike through Rob Valetini, who played himself to a standstill alongside back-row partner Pete Samu, after Foley had earlier slotted a penalty from right in front.

That set the stage for a dramatic second 20 minutes of the first half.

After Dalton Papalii was sin-binned for bringing down a maul the phase before Valetini’s try, the Wallabies rolled back upfield with all the momentum. They were however unable to cross the line from a sustained attack before Quinn Tupaea got on the ball at the breakdown and won his side the penalty.

Cue the first piece of drama.

After Caleb Clarke tore off through the Wallabies defence and down into the 22, Raynal sin-binned Tom Wright for cynical play. But a few moments later he was joined on the sidelines by Darcy Swain, after the TMO rightfully entered the game to highlight the lock’s targeting of Tupaea’s left leg.

On the evidence of Tupaea, who was left writhing on the ground and later seen hobbling into the sheds with ice on his knee, and the video replays, Swain could have few arguments with his dismissal.

He may, in fact, yet have more to answer for. And he will certainly have to answer to his teammates for a second dangerous offence this season after his head butt on Jonny Hill resulted in a two-week ban in July.

Those sin-binnings left the Wallabies down to 13 men for the five minutes before and after halftime and while the All Blacks butchered two gilt-edged chances to score before the break – Rieko Ioane’s pass to Beauden Barrett was a shocker – they did find their groove.

This article was originally published by Espn.co.uk. Read the original article here.

Tesla confirms Gigafactory Berlin has ramped up to 2,000 cars a week
Prince William calls for improved online safety after coroner’s ruling in Molly Russell death
Serial killer may be on loose in California after police link spate of shootings
Ukraine War: Claims of torture by Russian sympathisers
Mini-budget U-turn ruled out despite Bank of England’s emergency action