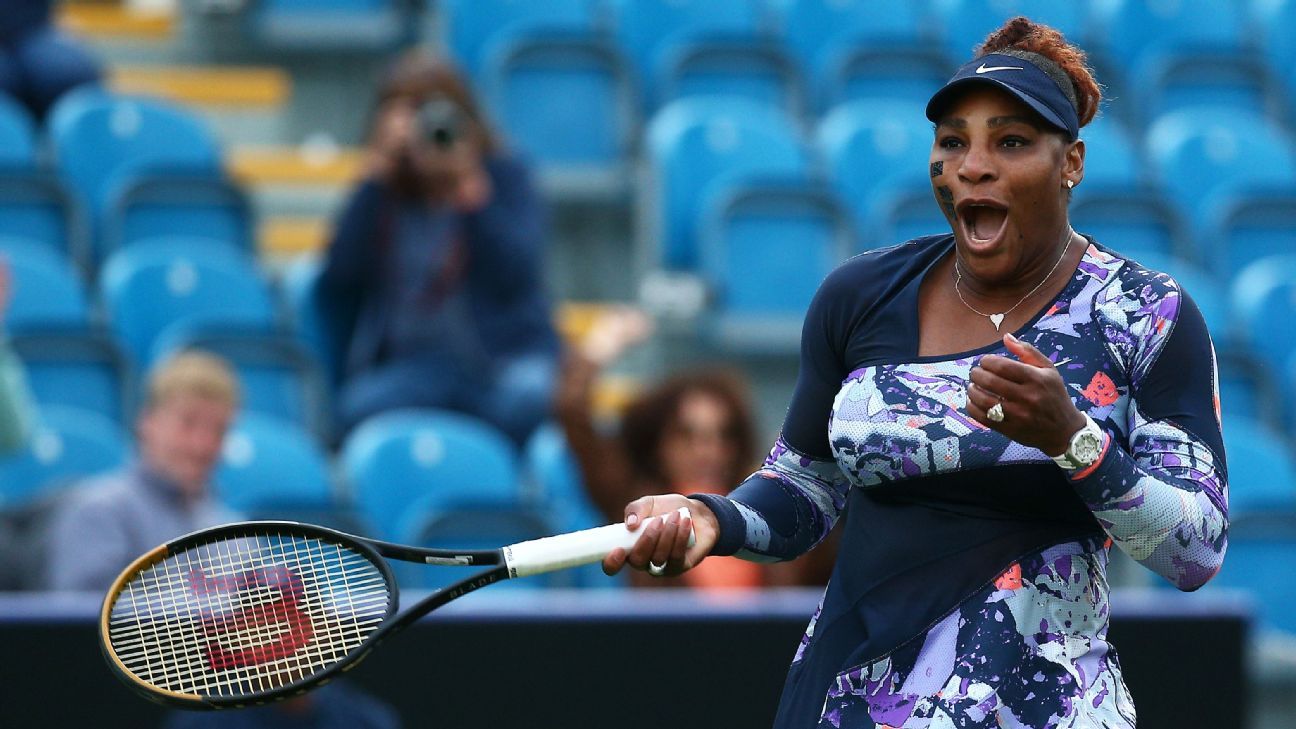 This year, Wimbledon will feature some of the sport’s all-time greats. But there will be just one 23-time major champion on the grass at the All England Club.

Serena Williams is set to make her eagerly anticipated return to competition on Tuesday when she takes on Harmony Tan in the first round.

The seven-time Wimbledon champ hasn’t played a singles match since retiring because of a torn hamstring in her opener a year ago. She began her comeback last week in doubles at Eastbourne, advancing to the semifinals with partner Ons Jabeur before Jabeur was forced to withdraw because of a knee injury.

Make your picks and compete for a chance to win $1,000! Make Your Picks

There are many questions about how Williams will fare over the fortnight, and beyond, and she will undoubtedly be the center of attention as the tournament gets underway.

But it’s not like she has kept a low profile over the past year. From movie premieres to the Oscars to furthering her business empire, Williams has basically been taking over the world.

Let’s take a look back at what she has been up to since the last time she stepped on the court at Wimbledon:

June 29, 2021: After her devastating exit at Wimbledon, Williams followed up with an Instagram post later that day in which she said she was “heartbroken” but grateful for the fan support.

Aug. 25, 2021: One day before the draw reveal, Williams announced she would not be playing at the US Open because of the same injury, which she now confirmed was a torn hamstring. Citing the need to give her body time to “heal completely,” Williams ended the message with an optimistic, “I’ll see you soon.”

Sept. 13, 2021: Naomi Osaka was a co-chair of the Met Gala, and US Open finalists Emma Raducanu and Leylah Fernandez cemented their “It girl” statuses, but it was Williams who ruled the red carpet at the famed (and pandemic-delayed) event.

Plus, her and sister Venus’ surprising photos with former foe Maria Sharapova had everyone talking for days.

Sept. 26, 2021: While Williams doesn’t celebrate the day for religious reasons, the rest of the tennis world was very aware of her 40th birthday, and there were countless tributes online, including from her husband Alexis Ohanian. She seemed to be living her best life while vacationing on the beach with Alexis and daughter Olympia.

November, 2021: With the impending release of “King Richard,” the biopic about their father and first coach, Serena and Venus Williams made the media rounds to help promote the film. The pair graced the cover of “Entertainment Weekly” with star Will Smith, appeared on his family’s “Red Table Talk” series and attended several premieres. A solo Serena stopped by “Jimmy Kimmel Live!” to talk about the movie — and even teased her return to competition by answering affirmatively to a question about being ready for the Australian Open. “Definitely,” she said.


Dec. 8, 2021: While it seemed as if a trip Down Under was in her future during her late-night interview, Williams dashed the hopes of her fans with a statement to the Australia Open’s official website the following month. “While this is never an easy decision to make, I am not where I need to be physically to compete,” she said. “Melbourne is one of my favorite cities to visit and I look forward to playing at the AO every year. I will miss seeing the fans, but am excited to return and compete at my highest level.”

All our love, @serenawilliams 💙

Jan. 17, 2022: Williams wasn’t on the court on the first day of play at the Australian Open, but her daughter was — and showing off her impressive two-handed backhand during a lesson that quickly went viral. (It’s the follow-through for us.) Williams had previously revealed that Olympia was taking tennis lessons and insisted she would not be the one coaching her. Still, that didn’t stop Venus from commenting, “It’s Oracene all over again!” in reference to their mom, who coached them alongside their father in their early days in the sport.

Feb. 13, 2022: The Los Angeles Rams were the Super Bowl champions, but even on one of sports and marketing’s biggest days of the year, Williams was one of the biggest winners. In a commercial for Michelob Ultra, co-starring with a virtual who’s who of A-list athletes, including Peyton Manning, Alex Morgan, Nneka Ogwumike and Jimmy Butler, Williams made the grandest entrance of them all.

March 1, 2022: Appearing on CNBC’s “Squawk Box,” Williams shared that her investment firm, Williams Ventures, raised $110 million in its inaugural round of fundraising. Per the New York Times, Williams Ventures was already an active angel investor in more than 60 companies. She’s not a business(wo)man, she’s a business, man.

“The reason I started @SerenaVentures is because I feel like the venture capital ecosystem really needs an inclusive player, and a player with a platform to make the necessary intact change at scale,” says @SerenaWilliams on raising $111M inaugural fund. pic.twitter.com/JVwnIjVXyB

March 27, 2022: With “King Richard” nominated in several categories, including Best Picture, Serena and Venus were given the honor of opening the Academy Awards by introducing Beyoncé’s tennis-themed performance of “Be Alive” from the film.

And that’s it. Nothing else interesting happened at the Oscars. Nope. Nothing at all.

Venus and Serena Williams kick off the #Oscars with an intro for the one and only queen B! https://t.co/YWqeuErY1z pic.twitter.com/O6dCu1O08X

April 7, 2022: Williams’ longtime coach Patrick Mouratoglou stunned the tennis world by announcing he would be working with Simona Halep, who defeated Williams in the 2019 Wimbledon final, on a full-time basis. “I had a conversation with Serena, and the door opened for me, at least short term, to work with someone else,” Mouratoglou wrote in a post on social media.

Speculation was immediate about what the move meant for Williams’ future in the sport, but she wasted no time in dispelling such rumors. While at a bitcoin conference in Miami later that day, Williams posted a video to her Instagram story with Green Bay Packers quarterback Aaron Rodgers and indicated she would be back for Wimbledon.

“We’ve been talking about my comeback, and [Rodgers has] been hyping me up and getting me ready for Wimbledon,” Williams said.

The video ended with Rodgers saying, “She’s back” while pointing at Williams.

Serena Williams nods at a Wimbledon return with Aaron Rodgers as her hype man.

April 21, 2022: Already an investor in Angel City FC of the NWSL and the NFL’s Miami Dolphins, Williams looked to expand her ownership empire by joining an ultimately failed bid for Chelsea FC. Led by Martin Broughton, the chairman of British Airways, and alongside the likes of F1 superstar Lewis Hamilton, Williams reportedly pledged $13 million to the group.

April 27, 2022: Nike unveils the “Serena Williams Building” at its global headquarters in Beaverton, Oregon. At 1 million square feet, or 140 full-size tennis courts, according to Nike, it’s the largest building on the campus and features labs, showrooms, a library and a 140-seat Olympia Theater, named after Serena’s daughter, of course.

“When I was just a kid, I visited the Nike campus and I saw that athletes get buildings,” Serena wrote on Instagram. “After that visit, I knew I wanted two things; to be a Nike athlete and to have a building. I set my goals high. I knew I would have to be elite, and not only the best, but someone that changes the course of sport.

“And now, here we are — officially unveiling the Serena building at the Nike campus. Blood sweat and many tears, many trophies — it is beyond an honor and giving me chill bumps.”

May 3, 2022: In a wide-ranging interview with Ellen DeGeneres, Williams talked about her business acumen, Beyoncé and Olympia’s potential in the sport (“Are you asking as a mom or like an athlete?”) but also hinted about a potential return to competition. Responding to DeGeneres asking if she still played a lot, Williams didn’t hesitate.

“I play all the time,” Williams said. “I haven’t played recently, but I’m actually going to get back on the court in a couple days.”


May 22, 2022: The French Open was underway in Paris. Unlike the previous two majors, Williams didn’t issue a statement about not playing, and fans were left to guess what her latest absence meant. She didn’t acknowledge the tournament on any of her social media accounts but did post throughout.

Tournament champion Iga Swiatek surpassed second-place Serena and tied Venus for the longest win streak (35) since 2000 by winning the title — and it was clear how much that distinction meant to her.

“Having that 35th win and doing something more than Serena did, it’s something special,” Swiatek said. “Because I always wanted to have some kind of a record. In tennis, it’s pretty hard after Serena’s career. So basically that really hit me.”

June 3, 2022: Williams’ name did not appear on the just-released entry list for Wimbledon, thus furthering rumors about her time in the sport. While her ranking had fallen out of the top 200 (and is now at 1,208), she would have been able to use her protected ranking to secure a spot in the main draw.

June 10, 2022: Williams posted a picture of herself standing alongside banana trees with a cryptic caption: “I’m thinking of something that may make you go bananas … stay tuned!”

Many commenters believed this is a sign she will be playing at Wimbledon.

June 14, 2022: Underneath an Instagram photo of an unmistakable grass court, featuring her wrapped-up ankles and racket bag, Williams posted the caption her fans had been waiting for: “SW and SW19. It’s a date. 2022 See you there.”

June 21, 2022: Williams made her return to competition, playing just doubles at Eastbourne with Jabeur. After dropping the first set in their opener, the duo came back to win the match — and ultimately made a run to the semifinals before having to withdraw because of Jabeur’s knee injury. Even in the short time, the #Onsrena pairing still provided plenty of viral moments.

Also, as was noted in this tweet, the fact that Serena made her comeback on the same day as Beyoncé released her new single feels like an auspicious sign for the future.