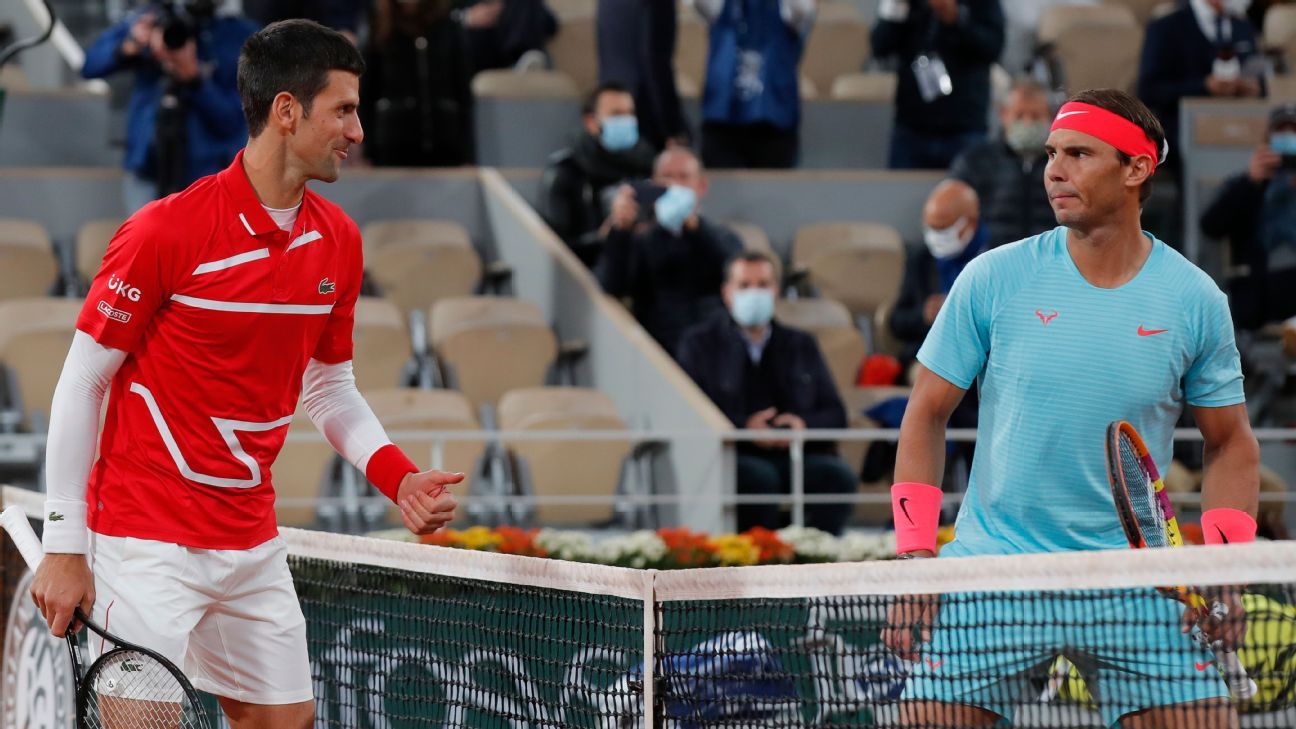 The 59th installment of the Novak Djokovic–Rafael Nadal rivalry takes place at the French Open under the lights Tuesday night — a quarterfinal match so hotly anticipated that organizers have ensured it will be played free to air, removing the usual paywall.

No two men have played each other more times than world No. 1 Djokovic and record 21-time Grand Slam winner Nadal, a rivalry that began in 2006 and has produced some of the most riveting entertainment imaginable.

Nadal, who turns 36 on Friday, won their first meeting, at Roland-Garros in 2006, when Djokovic retired after losing the first two sets. The Spaniard went on to win five of their first six battles.

At one stage, he led the head-to-head 14-4, but Djokovic, who turned 35 earlier this month, began to get a handle on him in 2011, when he beat him in a Slam for the first time at Wimbledon. Since then, he has edged in front 30-28, as the two men have gone toe-to-toe, their intensity matched only by their will to win.

This will be their 10th meeting at Roland-Garros, with Nadal winning eight of them. Djokovic’s two wins, including his breathtaking semifinal victory in Paris last year, led to his two French Open titles, while Nadal stands at 108-3 overall with a record 13 titles at Roland-Garros — his only other loss coming to Robin Soderling of Sweden in 2009.

Nadal has won 19 of his 27 clay-court meetings vs. Djokovic, including the 2020 final, when he played incredible tennis to win in straight sets. They have played each other in the final of all four Slams.

But Djokovic has not dropped a set on his way to the quarterfinals of this French Open, while Nadal had to play for four and a half hours to subdue Felix Auger-Aliassime in the fourth round. Whoever comes out on top will be favorite for the title, although they will probably have to beat rising star Carlos Alcaraz, who’s likely to be waiting in the semis.

🎙️ “Grand Slams have always been a priority.”

Novak Djokovic on defending his title and going for his 21 Major. #RolandGarros pic.twitter.com/HxJTvtyNOE

Why Novak Djokovic will win

After missing this year’s Australian Open after being deported for failing to meet the country’s COVID-19 vaccination requirements, the world No. 1 arrived in Paris rejuvenated, his confidence restored by his victory in the Rome Masters.

Four straight-set wins have taken him through to the last eight with very little concern, and unlike in some years here in the past, he believes he will beat Nadal. The defending champion knows that conditions in the night session, when temperatures will be cooler and the ball will not bounce up so high, will suit his game, and seeing Nadal struggle in the previous round against Auger-Aliassime can only strengthen his resolve.

Mats Wilander, the former world No. 1 and three-time Roland-Garros champion (the first of which came in 1982) believes Djokovic is channeling the saga in Australia, and the crowds in Paris have not always been on his side, to his benefit.

“I think he’s using the crowd to fire himself up unbelievably well,” Wilander said, in his role as Eurosport commentator. “They’re not against him but the crowd is definitely for the underdog in this tournament. He’s turning it into: ‘Well you know what, I’m going to show you I’m No. 1 in the world’ with his body language, and it helps him with the crowd. I guess I expect the same thing against Rafa because no one is against Rafa in Paris.”

After starting 2022 on such a high by winning the Australian Open, Nadal missed the first month of the clay-court season due to a fractured rib. His chronic left foot injury, which he has managed since 2005, then flared up in Rome.

Crucially, for the first time, he’s acknowledging that he’s nearing the end. “Being honest, every match that I play here, I don’t know if it’s going to be my last match here in Roland Garros in my tennis career, no?” he said. “That’s my situation now.”

Djokovic would also equal Nadal with 21 Grand Slams should he triumph this weekend, which should be motivation enough.

“I fancy my chances,” he said.

Why Rafael Nadal will win

Because he’s Rafael Nadal, and because this is Roland-Garros.

Nadal’s French Open title count will surely never be matched. Starting in 2005, he has dominated this event like no man has ever dominated a Slam.

It’s an uphill battle this time, on paper at least, given his shortened preparation, due to his rib, his foot injury in Rome and the fact that Djokovic appears to have reestablished his previously world-beating form.

But Nadal at Roland-Garros is a different animal from any other event, even Monte-Carlo, where he has won 11 times, and Barcelona, where he has 12 titles.

The enormity of Court Philippe Chatrier, the main court at Roland-Garros, allows Nadal to stand way back on return of serve, giving him more time on return and utilizing his strength. His retrieving skills are like no other’s, and the space behind and alongside the court gives him the chance to hit seemingly impossible shots.

The consensus seems to be that Nadal will need to start fast if he’s to beat Djokovic. The last time he beat the Serb from a set down was in the 2014 final, and the world No. 1 has played a lot less than him coming into their 59th battle.

There’s no question that Nadal would like hotter weather and the match to be played in the day.

“I don’t like night sessions on clay,” he said on several occasions this week. But the forecast is for it to be reasonably warm, just under 20 degrees, and the atmosphere of the night session, if last year is anything to go by, will help him fight to the end, as always.

Nadal will take confidence from the way he played in the final set of his win over Auger-Aliassime. Threatened and looking vulnerable, he upped the aggression on returns, began thumping his forehand and showed the 21-year-old who was still king.

There’s also the 2020 Roland-Garros final to compare this one to. On that occasion, when the event was played in October, conditions were cool and almost everyone gave him little chance to beat Djokovic. Sure, he would prefer the heat of the day, with his topspin rearing up above the shoulder, but perhaps there’s an element of mind games to his words this week.

If his foot is OK, and we have seen no evidence that it is bothering him this week, then Nadal, on clay at Roland-Garros, is still the biggest challenge of tennis. If Nadal starts well and gets the crowd behind him, he knows what he’s capable of.

After all, it’s only four months since he won the Australian Open.

For all of his unbelievable feats at Roland-Garros, Nadal beating Djokovic on these terms seems possible but unlikely. The odds are with the world No. 1, perhaps in four sets.