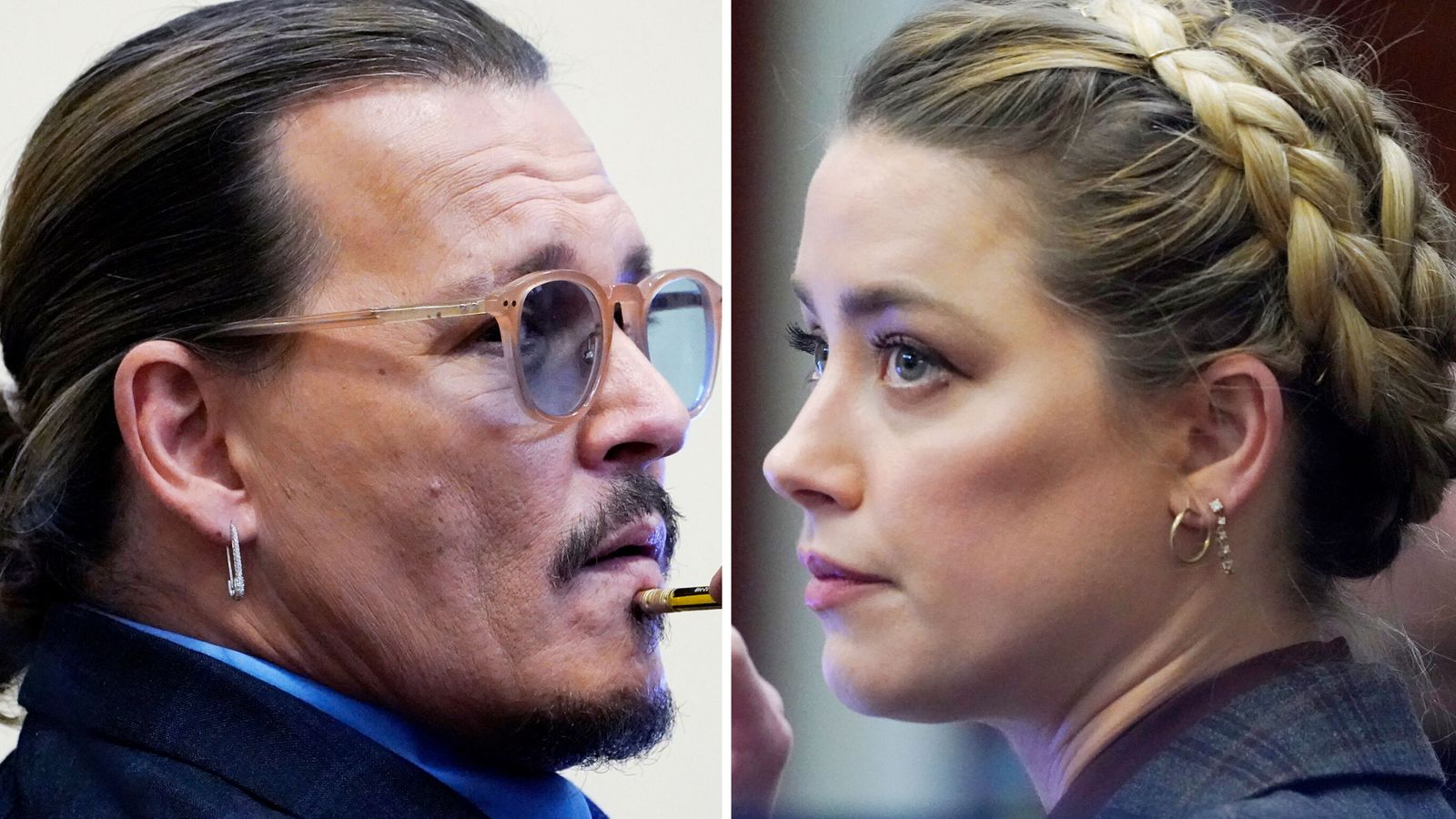 After a week’s break, the Johnny Depp v Amber Heard libel trial resumes today – with the actor’s legal team set to begin their questioning of his ex-wife following her allegations of physical and sexual abuse.

The hearing is taking place in Fairfax, Virginia, in front of jurors, who have now heard four weeks of testimony from family, friends, medics, expert witnesses and staff members past and present of both Depp and Heard, as well as the former couple themselves.

Lawyers for Depp have rested their case after finishing questioning of his witnesses, with Heard’s witnesses now set to give their side of the story for the remaining two weeks of the trial.

After that, it will be down to jurors to decide. Who will they believe?

Over the first four weeks, they have heard shocking insights into the former couple’s rows. Aside from the alleged physical violence, claims against Depp included an accusation that he held his dog out of a moving car window and that he painted messages in blood on the wall of a house in Australia after infamously severing his finger. He in turn has accused Heard of defecating in their bed and faking bleeding injuries using nail polish.

“Both sides have done a fair job at exposing the other’s less than finer moments”, libel and slander expert Kimberly Lau, a partner at New York legal firm Warshaw Burstein, tells Sky News. “What will make this trial particularly challenging for a jury is the fact that both parties are trained actors whose job is to make the audience believe they are, in fact, the role they play.

“The testimony of the witnesses and documentary evidence will be even more essential for the jury to determine who is really telling the truth and who may be merely acting out a role.”

Depp is suing Heard for libel over an article published wrote in The Washington Post in December 2018, which his lawyers say falsely implies he physically and sexually abused her – even though it did not mention his name.

He strenuously denies allegations of abuse and throughout the trial has told the court that he is “obsessed with the truth” and accused Heard of being the violent one during their relationship.

This trial in the US comes after the former Pirates Of The Caribbean star lost a similar defamation case in the UK, which he brought against the publishers of The Sun, News Group Newspapers (NGN), for publishing an article that referred to him as a “wife-beater” in the headline.

Following a 16-day trial in July 2020, a judge found the content of the article to be “substantially true” and Depp was later refused permission to appeal against the decision at the Court of Appeal.

But this case in America is being heard in front of a jury, rather than just a judge.

‘Juries come with an inherent unpredictability

“Having a jury of several individuals – in this case, seven – makes a big difference in the deliberation process,” says Ms Lau.

“The opinion of one is not enough; all seven must agree. And while judges, unlike juries, already have an understanding of the law, the jury is comprised of several individuals whose life experiences can have an impact on how they view and weigh the evidence at trial.”

As well as being held in front of a jury, proceedings are being broadcast around the world live from the court – unlike the UK, cameras are permitted in courtrooms in the US.

Matthew Dando, a partner and media law expert at London firm Wiggin, says that although televised hearings will not affect the outcome of the trial, they do have an effect on media coverage and public opinion.

“It will inevitably mean that the advocates are not just playing to the people in the courtroom, but directly through television… they’re playing directly to the public,” he told the PA news agency. “So it affects the dynamic of the trial.”

“Juries come with an inherent unpredictability, and that’s why if this were being heard again by purely a judge alone you’d probably expect it to go the same way as the UK case,” says Alex Wade, also a partner at Wiggin. “But as Matt says, the various counsel in the US will play to the jury.”

As it was in the UK, this case is a civil trial, not a criminal one; if Depp loses, it doesn’t mean he has been found guilty of a crime.

But as a public figure, the actor has a higher burden of proof for his defamation claims than a private individual, Ms Lau says. The burden is on him to prove “by clear and convincing evidence” that Heard’s statements in her Washington Post column “were made with actual malice – which means she knew the statement was false or recklessly failed to verify the claim”.

‘It’s hard to unring a bell’

If Depp wins, the jury will determine damages. He has sued for $50m, but jurors may decide there is a basis to award less or more. Punitive damages could also ordered to be paid on top of compensatory damages.

Heard is counter-suing for $100m – as she is 20 years younger, the potential damages to her career are longer than Depp’s, according to Ms Lau – and the same legal burdens and standards apply to her.

Depp has told the trial that whatever the outcome, he has lost. “The second the allegations were made against me… and turned into fodder for the media… I lost then,” he told jurors as he took the stand for the first time back in April.

Read more:
The article that sparked the entire case
Why are Depp and Heard in court?

“I lost because that is not a thing that anyone is going just put on your back for a short period of time. I will live with that for the rest of my life.”

“It will be tough for Depp to completely salvage his career even if he prevails at trial,” says Ms Lau. “The accusations may be enough to make some question the truth no matter what the outcome at trial. It’s hard to unring a bell.”

The trial, which is set to last until the end of May, continues at the Fairfax County District Courthouse.

Two-year extension of steel tariffs despite plea for imports from manufacturers
Gordon Brown says Britain is ‘at war with America over Ireland’
Ukraine War: Was the shopping centre missile attack deliberate?
Kendrick Lamar makes blood-soaked plea for women’s rights at Glastonbury in attack on abortion ruling
Italy reports 919 virus deaths in one day