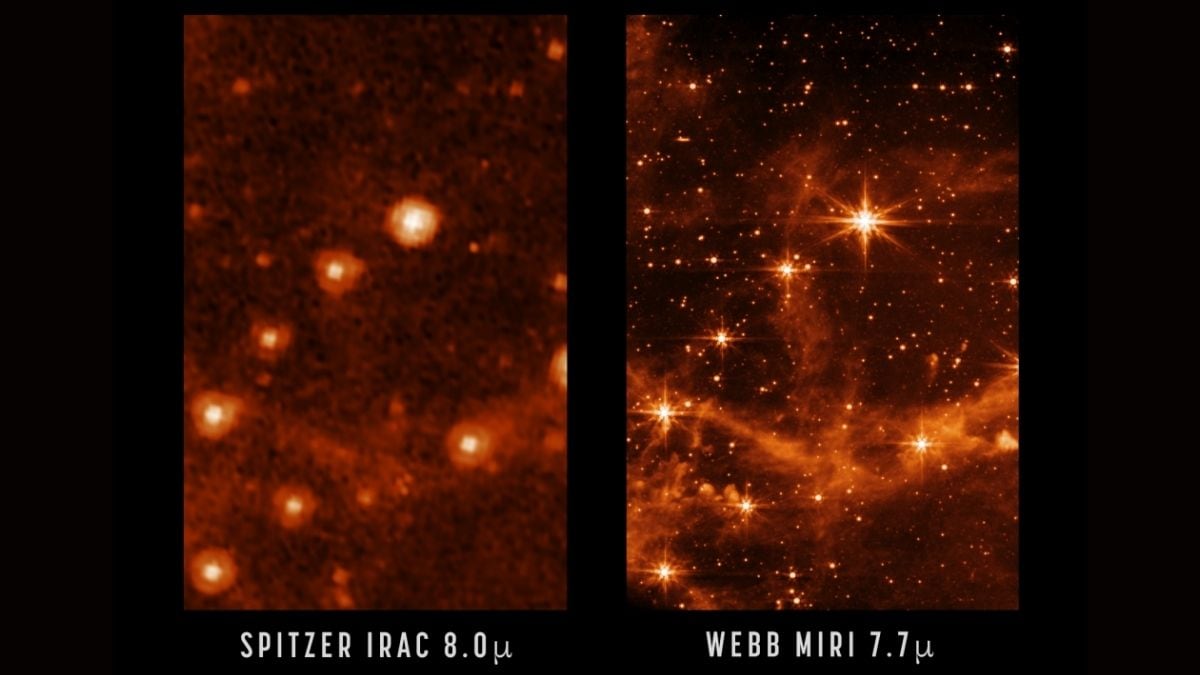 NASA’s Spitzer Space Telescope’s Infrared Array Camera achieved great feats for the American Space agency. The retired observatory has captured several spectacular images of the deep space until recently. It was the first of its kind to provide high-resolution images of the near- and mid-infrared universe. And, now, we are glad that it has received a worthy successor. We are referring to NASA’s James Webb Space Telescope. One of the four instruments placed on this telescope has delivered an image of a portion of the sky that was previously captured by Spitzer. And guess what? The latest image is way lot sharper than the archival shot.

The image is shown at 7.7 microns. It shows a portion of the Large Magellanic Cloud, which is a small satellite galaxy of the Milky Way. This part of the sky includes a dense star field that is perfect to test Webb’s performance.

NASA published a blog on the comparative study of the two images taken by NASA’s two different pieces of equipment. The Spitzer took the old image at 0.8 microns, making it a vital factor causing the difference in quality between the two photos.

The James Webb Space Telescope has four science instruments. Its significantly larger primary mirror and improved detectors are allowing scientists to see the infrared sky with better clarity. This is helping them to make more discoveries.

This particular image was taken by Webb’s “coldest instrument” as part of a test. We are talking about the Mid-Infrared Instrument or MIRI. In the image taken by MIRI, the interstellar gas can be seen in such a detail that was never seen before. According to the website, “Here, you can see the emission from “polycyclic aromatic hydrocarbons,” or molecules of carbon and hydrogen that play an important role in the thermal balance and chemistry of interstellar gas.”

These test images with MIRI help scientists ascertain that the Webb telescope can further improve deep space research. MIRI can capture the birth of new stars and protoplanetary systems to help in these studies.

This image is a part of a test being carried out by the Webb team. The aim is to set up and test each of Webb’s instruments in order to begin observations this summer.