Security forces in Lebanon have fired water cannon and tear gas at anti-government protesters calling for justice on the one-year anniversary of the Beirut explosion.

Demonstrators in the city had been throwing stones at the parliament building, with some trying to climb its gate.

Earlier, thousands of people gathered to hold a moment of silence to mark exactly one year since the blast at the city’s port, which killed more than 200 people and wounded thousands. 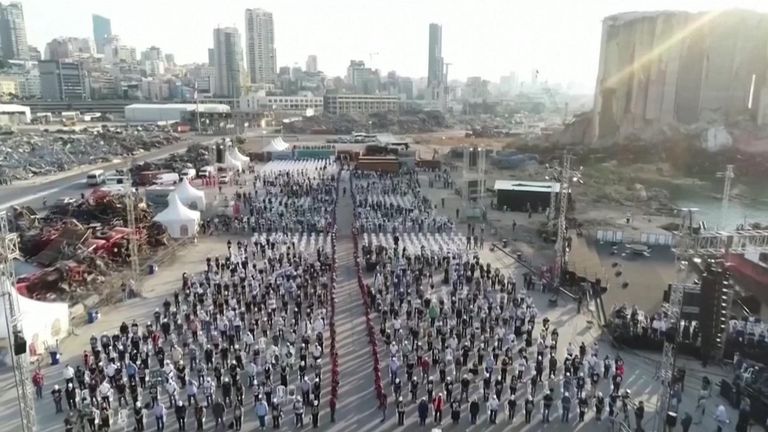 Minute silence one year on from Beirut blast

Protesters were seen marching through the streets, waving Lebanese flags and holding pictures of victims.

Banks, businesses and government offices were closed to pay tribute to those who lost their lives on what was declared a national day of mourning.

No senior official has yet been held to account for the explosion, which was caused by a huge quantity of ammonium nitrate stored unsafely at the port for years.

“We will not forget and we will not forgive them ever,” said Hiyam al Bikai, dressed in black and clutching a picture of her son, Ahmad, who was killed when masonry fell on his car.

“And if they can’t bring them to account, we will by our own hands.”

Another source of public anger is the country’s crippling economy, which will receive £266m in emergency aid raised at a donor conference on Wednesday.

In his remarks at the event, French President Emmanuel Macron criticised a “failing” Lebanese political class that has been unable to form a government in the year since the blast, despite French and international pressure.

“Lebanese leaders seem to bet on a stalling strategy, which I regret and I think is a historic and moral failure,” he said.

President Joe Biden said the US will give the country almost $100m (£72m) in additional humanitarian aid.

A Lebanese investigation into the explosion is at a standstill as requests have been denied for senior politicians and formal officials to lose immunity.

All those sought for questioning by the Lebanese investigators have denied responsibility.

Lebanon’s most senior Christian cleric also held a mass with the families of the victims at the port, saying the Lebanese people need to know who engaged in actions that led to the blast.

“Justice isn’t just the demand of the families of the victims but of all Lebanese,” Maronite Patriarch Bechara Boutros al Rai said.

He added: “We want to know who brought in the explosives… who allowed for their unloading… who withdrew quantities [of explosives] from it and where it was sent.”

The damage from the blast is still visible across large swathes of Beirut and the port remains unrepaired.