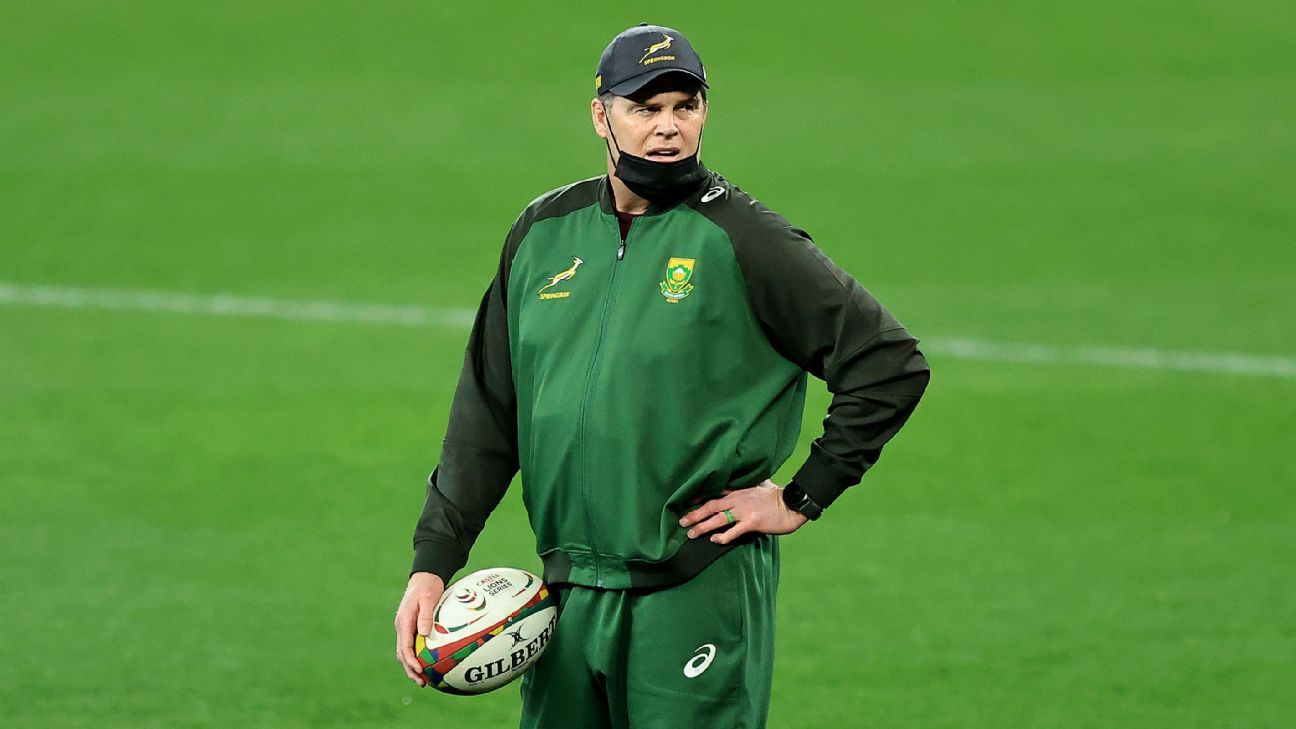 South Africa’s director of rugby, Rassie Erasmus, posted an hour-long video on Twitter on Thursday airing his grievances over the refereeing in the first test of the British & Irish Lions tour, before saying he would “step away” for the last two tests.

The Boks and Lions have each repeatedly voiced their displeasure at the officiating for the three-test tour, starting before the series began and leading to growing tensions between the two camps’ officials.

Erasmus made his latest remarks in a video first posted on Twitter, in which he used 26 video clips to explain his unhappiness with the match officials after Saturday’s 22-17 first test loss in Cape Town.

It was unclear who exactly the video was intended for, although it may be World Rugby.

“I’ll step away from the last two Test matches, but let the Springboks and the Lions have an equal chance on the field when it comes to laws, respect, the way players get treated, what is said in a pre-match coaches meeting with the referees, how they give feedback post that, and how things get said in the media,” Erasmus said.

Erasmus expressed frustration at what he suggested was uneven refereeing at the weekend.

“I’m not saying the referee was a cheat at all, I’m saying we just wanted clarity on a Sunday night and didn’t get [it] until a Tuesday and, to be honest, I am not very convinced with the clarity we got from [Australian referee] Nic Berry,” Erasmus said.

“I’ve had previous encounters where I made mistakes, saying things in public about referees, and normally it comes back to bite you, but in this instance the Lions only comes around every 12 years.”

Erasmus added that he would take the blame for any fall-out from the video and said he was willing to give up his controversial but legal role as water carrier that has seen him offer on-field advice to players.

“As director of rugby, if this causes that I’m not allowed to be a water carrier, I’ll step away,” Erasmus said.

The second test in the three-game series will be played at the same venue on Saturday.

This article was originally published by Espn.co.uk. Read the original article here.

Obama: ‘We’re building Iron Man’
Google poised to unveil how it plans to take on ChatGPT
Wyshynski: Predicting every NHL All-Star’s impact for the rest of the season
‘No excuse for dodging scrutiny’: Labour demands report on levelling up progress
‘Coming very soon!’: Jeremy Renner shares image of new show which will be out ‘as soon as I’m back on my feet’