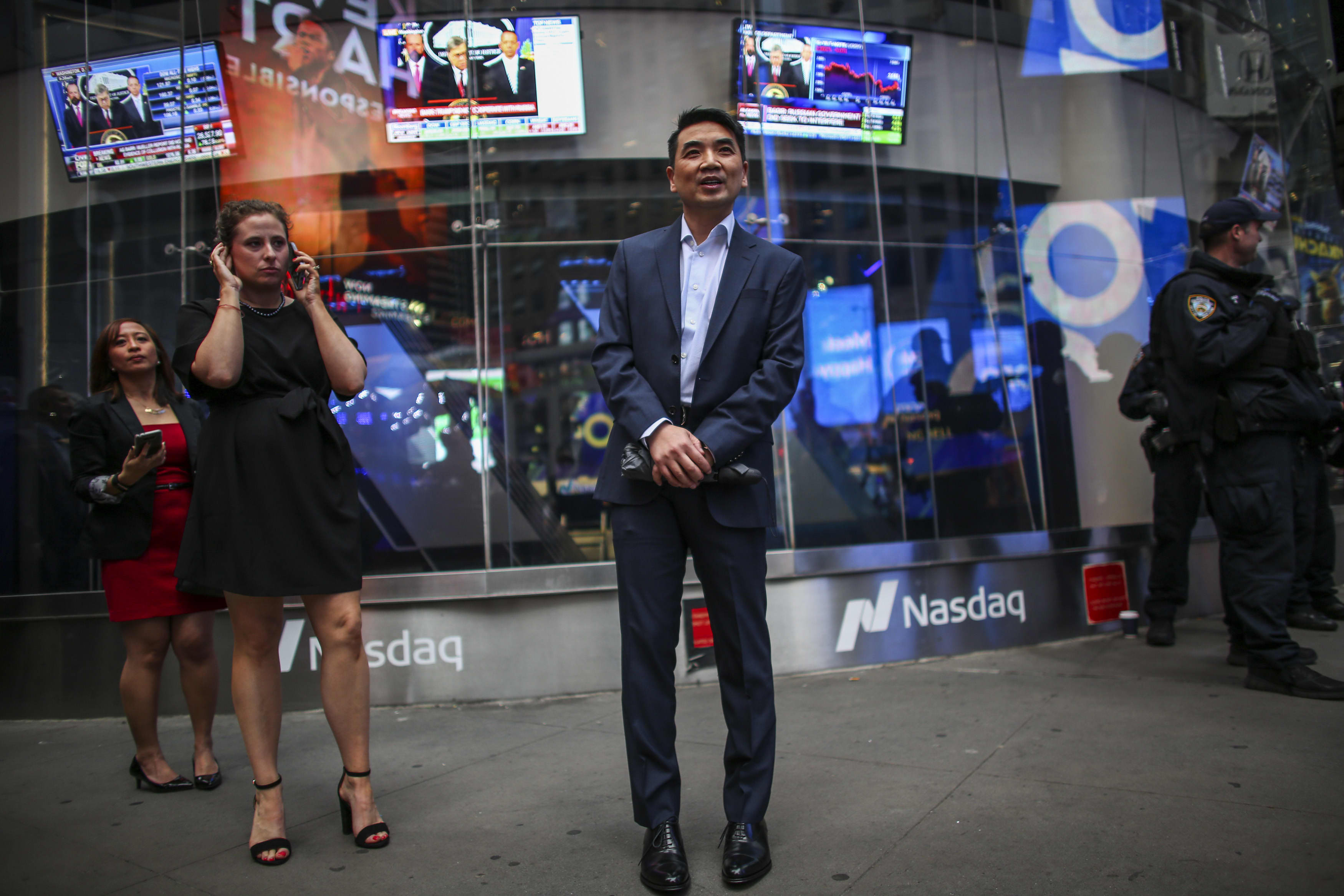 Zoom founder Eric Yuan poses in front of the Nasdaq building as the screen shows the logo of the video-conferencing software company Zoom after the opening bell ceremony on April 18, 2019 in New York City. The video-conferencing software company announced it’s IPO priced at $36 per share, at an estimated value of $9.2 billion.
Kena Betancur | Getty Images

Salesforce needed 14 years as a public company to reach a market cap of $100 billion. Getting there required three multibillion-dollar acquisitions and four distinct revenue sources.

When Zoom topped the $100 billion mark last year, it had been public for just over 14 months. The company was reliant on a single product and had completed just one tiny acquisition.

While it’s still just a toddler on the Nasdaq, Zoom is now being forced to take on adult responsibilities for investors, thanks to its unexpectedly rapid ascent. The video chat company’s historic growth during the Covid-19 pandemic vaulted its market cap from $9.2 billion at the time of its 2019 IPO to a peak of $159 billion in October, putting it tentatively even with Cisco.

Zoom has lost about one-third of its value since then, despite reporting 191% revenue growth in the latest quarter, as investors prepare for a post-pandemic future and as competition picks up, most notably from Microsoft Teams.

Still, Zoom is among the 25-most valuable North American tech companies and the only one in that pack to go public in the last four years. Shopify and Snap, which went public in 2015 and 2017, respectively, are the only companies in the group that trade for a richer multiple to sales.

In other words, the stock market is giving Zoom the tools to become a major dealmaker. And Zoom is taking advantage, announcing earlier this week the $14.7 billion purchase of Five9, which sells cloud-based software to call centers.

“It allows them to use their currency to buy things that are impactful,” said Alfred Chuang, a partner at venture firm Race Capital who previously co-founded BEA Systems and sold it to Oracle for $8.5 billion in 2008. “I can’t imagine this will be last one.”

The Five9 deal is one of the 10 largest U.S. enterprise software transactions on record, according to FactSet, and is bigger than any acquisition ever by Amazon, Google, Oracle, Cisco or Adobe. At about 23 times Five9’s expected 2022 revenue, it’s also the second-priciest software deal on a price-to-sales basis, behind only Salesforce’s $27 billion purchase of Slack, which closed earlier this month.

Chuang, who has been friends with Zoom CEO Eric Yuan since his pre-Zoom days at WebEx, says Yuan is now in a position familiar to Salesforce CEO Marc Benioff, whose company has more than doubled in value since mid-2018 to $240 billion.

Both companies are set up to be cloud consolidators as automation changes the future of work and the enterprise software stack of the future gets built, Chuang said. In the three years since reaching a $100 billion market cap, Salesforce has completed four billion-dollar-plus deals, including Slack and the $15.7 billion purchase of Tableau.

“Not everything has worked out,” Chuang said, but he argues it’s important to take take big swings, even if the business is currently in good shape.

“When you have a very fast-growing company and become very successful, most people don’t want to rock the boat,” he said. “Acquisitions are not only useful to acquire customers but are super critical to satisfy a product vision you may have.”

Zoom’s initial talks with Five9 date back to last year, according to people familiar with the matter. The CEOs, who both previously worked on collaboration products at Cisco, know each other well and forged a product integration in 2019, when Zoom launched a phone offering.

Yuan was a lead engineer at WebEx when the company was acquired by Cisco in 2007, and Five9 CEO Rowan Trollope ran all of Cisco’s collaboration products, including WebEx, until taking the Five9 job in 2018. They never overlapped at Cisco — Yuan left to start Zoom a year before Trollope joined — but the connection is key as they both saw the challenges of retrofitting a legacy technology company for the cloud era.

Acquisition talks cooled for a while and picked up in the last three months, said people with knowledge of the transaction, who asked not to be named because the discussions were confidential. That’s when Goldman Sachs started advising Zoom on a deal and Five9 hired Frank Quattrone’s Qatalyst Partners.

Bawa has assumed increased responsibilities elsewhere in the business. She oversees security, privacy and government relations, which all took center stage as Zoom became a widely-used service at large enterprises as well as in education, health care and among religious organizations.

At a Morgan Stanley investor event in March, Steckelberg was asked about Zoom’s plans for the call center.

“Contact center is an absolutely really important part of the phone strategy,” Steckelberg said in response. “The way we approach that today is through partnering. We have great relationships with Five9. Eric and Rowan are very good friends.”

Zoom’s goal is to be not only a video service used for meetings with co-workers and clients, but to become the center of all work communication, including for customer service reps in call centers.

Yuan went a step further in June on Zoom’s quarterly earnings call. He responded to an analyst’s question about contact center expansion by telling investors, “Stay tuned, you will see something.” He followed by suggesting that details could be revealed around the time of the company’s Zoomtopia conference in September.

“I hope we will be able to do more,” he said, indicating that Zoom may go beyond integrations with call center technology providers.

A big reason why an agreement took so long to come together was because both stocks were so volatile, people familiar with the talks said. Shares of Zoom and Five9 moved 10% or more in a single week on several occasions this year, making it difficult to come to terms. Ultimately, the acquisition price was a modest 13% premium to Five9’s last closing price before the announcement.

The deal is projected to close in the first half of 2022 and Trollope will continue to run Five9 as a president of Zoom. Five9 adds a projected $650 million in revenue next year to the $4.8 billion in sales that analysts expect from Zoom, according to StreetAccount.

On the investor call following the announcement, Yuan and Trollope said that common customers have been telling them they want to count on a single vendor that can provide communications technology for internal purposes as well as customer service. Zoom could invest in building the product itself, but customers “do not want to wait,” Yuan said.

Analysts like BTIG’s Matt VanVliet said the decision to buy instead of build is the right one.

“Overall, we are encouraged by Zoom’s strategy to supercharge its platform with this acquisition rather than rely purely on its own internal R&D chops, which would have taken years to scale,” wrote VanVliet, who has a buy recommendation on Zoom, in a report on July 19.

Zoom has a long way to go before it can claim to have a portfolio of cloud software products, like Salesforce, Adobe and ServiceNow.

Late last year, the company entered the live events space with the launch of a homegrown product called OnZoom, expanding the video platform beyond the workplace and betting that online gatherings, in some form, are here to stay. In July, Zoom hired Abhisht Arora, a 21-year Microsoft veteran and Teams program manager, as its head of corporate strategy, reporting directly to Yuan.

Between development of new products and big acquisitions into parallel markets, Yuan is trying to ensure that Zoom is more than just a pandemic stock, and that its status as an enterprise giant remains long after we say goodbye to Covid-19.

WATCH: Zoom’s acquisition of Five9 is a ‘steal of a deal,’ says analyst

This article was originally published by Cnbc.com. Read the original article here.