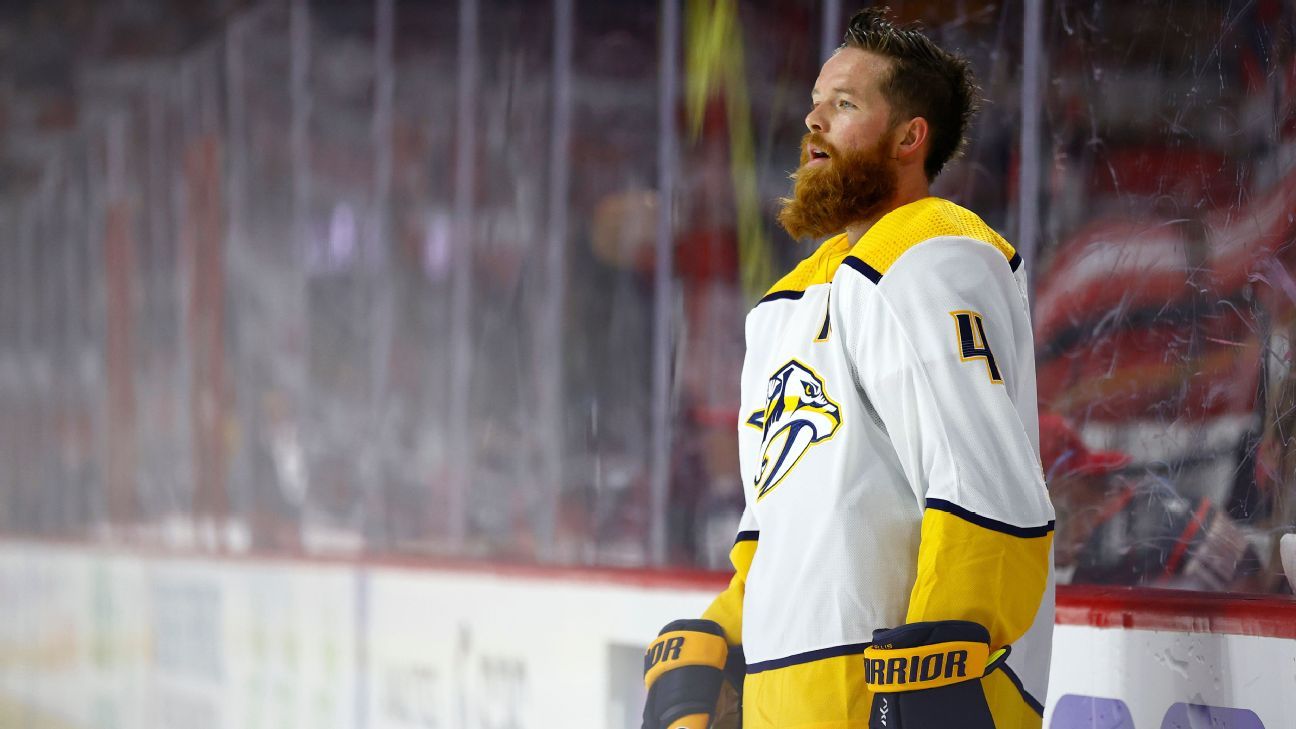 The Philadelphia Flyers, Nashville Predators and Vegas Golden Knights made interconnected trades ahead of Saturday’s roster freeze for the Seattle Kraken expansion draft.

The Flyers traded center Nolan Patrick and defenseman Philippe Myers to Nashville for defenseman Ryan Ellis, who then sent Patrick to Vegas for center Cody Glass.

How did each of the GMs do in this deal? Here are our grades for each club:

The Flyers never replaced defenseman Matt Niskanen after his surprising retirement in Oct. 2020 and they suffered for it. Not just in the defensive end of the ice, but for losing someone who can move the puck too. Ellis is a much better version of that defenseman, and despite the fact he’s turning 31 next January, he’s a fantastic acquisition for the Flyers.

In a typical season, Ellis is good for over 23 minutes of ice time per game, over 30 points per season and helps his team at 5-on-5 and on the penalty kill. He’s going to be able to anchor whatever defensive pairing on which he plays. He’s coming off a rough season, but his previous three seasons saw him stealthily emerge as one of the NHL’s better defensemen, and an analytics darling, driving offensive play for the Predators.

Every trade made under a flat salary cap needs to be scrutinized financially, and Ellis gives the Flyers cost certainty through 2026-27 at $6.25 million against the salary cap. Granted, that takes him into his later 30s, but for now it’s a great defenseman at a great cap hit, and the Flyers are certainly looking at the now given the makeup of this roster.

The cost was potentially high. The Flyers liked Myers, 24, and Patrick still has a world of promise despite never coming close to fulfilling the lofty expectations of his second overall draft position in 2017. (But more on that in the Vegas section.)

“I don’t think we gave up on Nolan. We acquired one of the best defensemen in the National Hockey League,” said GM Chuck Fletcher on Saturday. “He’s what we need at this time.”

GM David Poile wanted to get younger. Myers and Glass makes him younger; and in Myers’ case bigger, as they add a 6-foot-5 defenseman to their back end.

He clearly wanted more cap flexibility and shipping out a contract he was tied to through 202627. In fact, Nashville trading away Ellis and Viktor Arvidsson, who went to the Los Angeles Kings earlier in the month, has cleared $10.5 million in cap space.

“We felt it was time for a change to our core this offseason,” said Poile.

Make no mistake: Ryan Ellis is an outstanding defenseman when healthy. There were times in recent memory when he was the hipster pick for best defenseman on the Predators, a team with a Norris Trophy winner in Roman Josi. But the Predators are clearly looking to reshape their roster after diminishing recent returns, acknowledging that they need to enter the next phase of the team after their contending window may have closed with the current core.

Financial flexibility and younger players are a good step forward — and getting Glass for Patrick is a nice bit of business, not only for the 22-year-old center’s potential, but because he’s exempt from the expansion draft.

The Golden Knights told us everything we needed to know about where Glass fit on their roster when he spent the entire playoffs in street clothes, even when the team was desperate for offense against the Montreal Canadiens — including on the power play. If that didn’t mean they were done with him, it certainly meant they would sacrifice him in a millisecond in the right trade.

And GM Kelly McCrimmon getting a chance to acquire a former second-overall pick from the Brandon Wheat Kings of the Western Hockey League — the junior team he owned — is clearly the right trade in the Knights’ eyes.

A seven-part, behind-the-scenes docuseries going on and off the ice and in locker rooms for an all-access pass during the pursuit of the Stanley Cup. Watch on ESPN+

The grade here is mostly for who Nolan Patrick is, rather than what the Knights believe he can become. He has 70 points in 197 NHL games. He was a bottom-six forward for the Flyers after returning from a migraine disorder that kept him out from April 2019 through January 2021. His coach clearly didn’t give him a sporting chance to develop into a top-flight offensive center. His current general manager wasn’t there when the Flyers drafted him, and just shipped him out for a 30-year-old defenseman.

Again, we can’t go too high here because Nolan Patrick is what Nolan Patrick is at this time, and there have been health concerns for him in his career. But there was a time when another No. 2 overall pick was traded from an Eastern Conference team to a Western Conference team, and soon found himself among the NHL’s All-Stars. Granted, Tyler Seguin had already had more offensive impact than has Patrick in his first three seasons. But it’s just a reminder what the right fit can do to unlock potential.

Head of Epsom College found dead on school grounds along with husband and seven-year-old daughter
Nadhim Zahawi sacked as Tory chairman over tax affairs row
It is as though ‘she vanished into thin air’, Nicola Bulley’s partner says
Two men jailed for murder and property fraud plot of 71-year-old woman
Tiny, radioactive capsule went missing. See where it was found