NHS chief Sir Simon Stevens has failed to confirm he has confidence in Matt Hancock.

Asked repeatedly if, having worked alongside the health secretary during the pandemic, he has confidence in his ability, Sir Simon refused to give Mr Hancock his support.

Pressed on whether the health secretary is hopeless, the NHS boss smirks after an awkward pause and fails to answer.

“I mean, that is a political question,” he added.

It comes a day after Dominic Cummings published expletive-laden WhatsApp messages, allegedly from Boris Johnson, in which the PM appears to call Mr Hancock “hopeless”.

The PM’s former senior aide published the messages as part of a 7,000-word blogpost which appears to include a series of claims about Mr Johnson and Mr Hancock, including that the prime minister considered removing responsibility for PPE from the health secretary.

In one exchange, which Mr Cummings said was part of late-night messages on 26 March 2020, he and Mr Johnson appear to be discussing actions from “MH” in boosting the UK’s COVID testing capacity.

The screenshot shows a reply from the prime minister stating: “Totally f****** hopeless”.

At a lobby briefing on Wednesday, Downing Street did not deny the messages were authentic, but assured journalists that the PM has full confidence in the health secretary.

“I am not planning to engage with every allegation put forward, the prime minister has worked very closely with the health secretary throughout and will continue to do so,” the spokesman said.

Asked if there were security concerns about Mr Cummings’s disclosure of messages, the spokesman added: “I don’t plan to get into individual cases, there are rules published for former advisers to observe.”

As he left the Department of Health for the House of Commons on Wednesday, Mr Hancock was asked if he believed himself to be “hopeless”.

Pressed again on the matter on Thursday, the health secretary said: “I’m not going to get in to that.”

But when the text messages were put to Sir Simon on Thursday, he could not say that he had full faith in the health secretary. 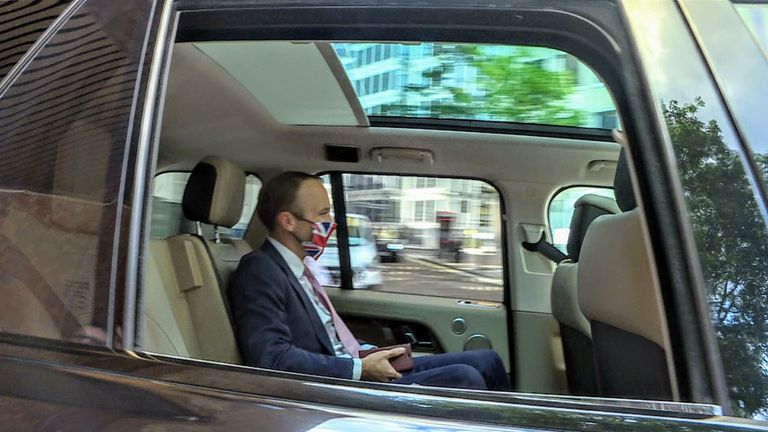 ‘Are you hopeless Mr Hancock?’

Sir Simon is due to step down as head of NHS England at the end of July after having overseen the COVID vaccination rollout to adults.

The PM has previously praised Sir Simon for leading the NHS with “great distinction” and he is due to become a peer in the House of Lords following his departure.

But there has not always been such an amicable relationship between Sir Simon and Mr Johnson, who attended Oxford University together, with tensions occurring between ministers and top health officials throughout the pandemic.

There were concerns earlier in the year that the NHS would not be able to successfully roll out the vaccination programme.

But those sceptical have since been proven wrong, with Mr Hancock announcing on Thursday that all over 18s will be able to take up the offer of a jab.

Baroness Harding, who is the wife of Tory MP John Penrose, formally entered the running to become the top boss of England’s healthcare system on Thursday.

Liz Truss rules out future PM bid but ‘doesn’t regret’ her short time in No 10
‘Can’t wait for this guy to die’: Reporter reveals some GOP sentiment towards Trump
Ford (F) Q4 2022 results: Beats on revenue and misses earnings
How US shot down China’s ‘spy balloon’ with a single missile – and what was likely on it
Beyond the ‘balloon watch’ gimmicks this is an extremely serious moment