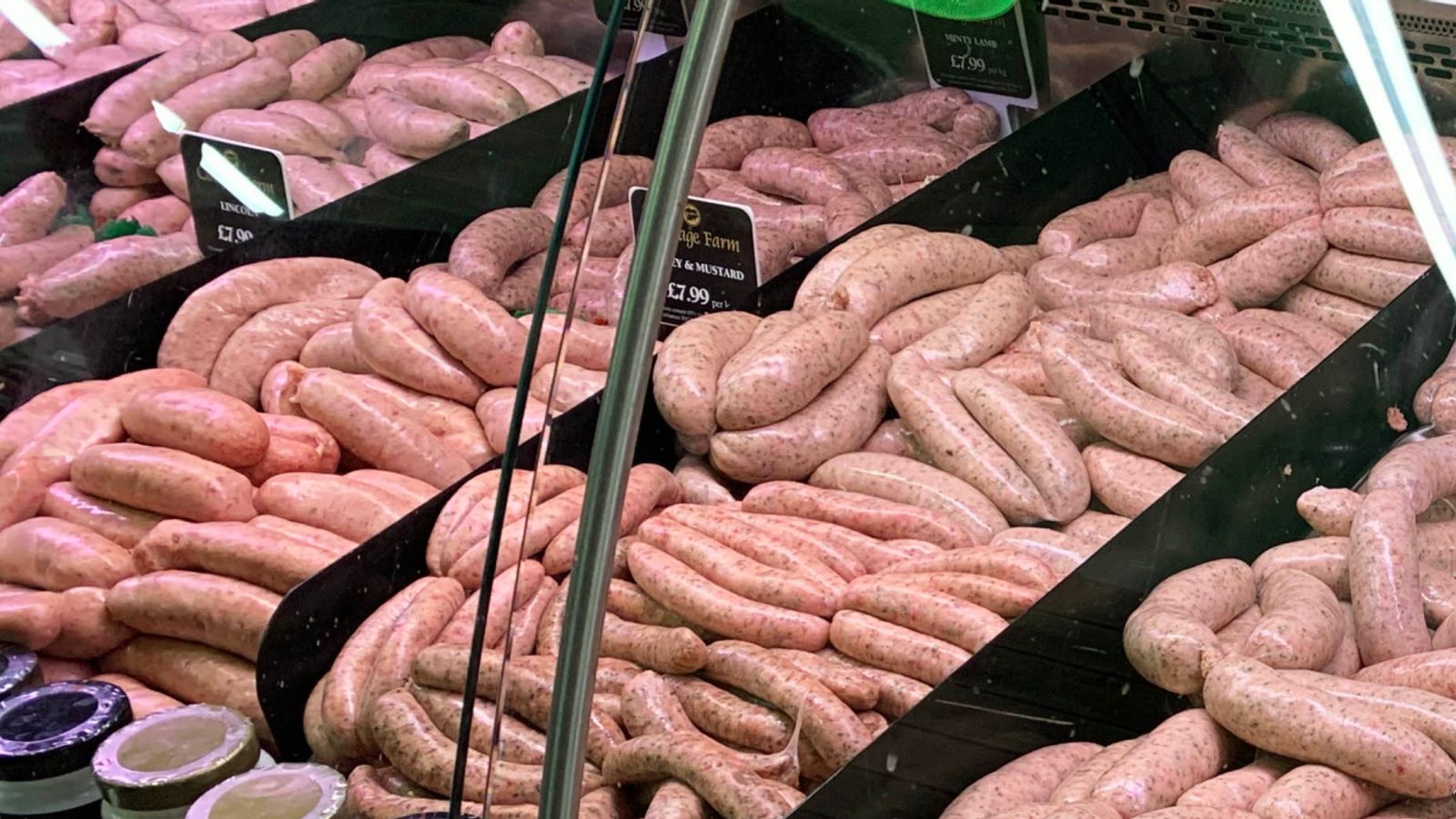 Environment secretary George Eustice has described a ban on exporting sausages and processed meats from Great Britain to Northern Ireland agreed as part of the Brexit process as “nonsensical”.

Under the terms of the Northern Ireland Protocol a ban will come into force if the UK and EU cannot agree new regulatory standards to cover the sale of processed meats before the end of a “grace period” on 1 July.

UK and EU officials will meet on Wednesday to discuss the protocol amid heightened political rhetoric between London and Brussels and increasing community tension in Northern Ireland.

A spokesman for prime minister Boris Johnson echoed Mr Eustice’s comments, saying there was “no case whatsoever” for barring the sale of chilled meets in Northern Ireland and saying its attempts to resolve the impasse had met a stony response.

European Commision lead Maros Sefcovic had warned earlier that the EU will act “swiftly, firmly and resolutely” if the UK decides unilaterally to extend the grace period.

His comments, published in the Daily Telegraph, came after Brexit Minister Lord Frost, who negotiated the EU withdrawal agreement, admitted the government had underestimated the impact of the customs checks and regulations required by the Protocol.

For months before and after the Brexit deal was signed in December 2020, Prime Minister Boris Johnson and other members of the government including Northern Ireland secretary Brandon Lewis denied there would be any customs checks.

Mr Eustice told Sky News the EU was to blame for the impasse.

“What you have to bear in mind is that the Protocol always envisaged that both parties would show best endeavours to make the Northern Ireland Protocol work, and that included recognising that Northern Ireland was an integral part of the UK and that you should support the free flow of goods to Northern Ireland,” he said.

“What we really need the EU to do is to respect that part of the Protocol and put in place sensible measures to remove things like the nonsensical ban on selling sausages or chicken nuggets to Northern Ireland – not just requiring paperwork, but actually having an outright ban on some of those goods – that clearly doesn’t make sense.”

“We’re committed to making it work but we just need the European Union to engage in that process to iron out those issues.”

The protocol is intended to manage the technical, trading and political complexities of Northern Ireland’s unique position post-Brexit, and crucially to avoid a hard land border with Ireland.

While Northern Ireland has left the EU customs area along with the rest of the UK, it continues to abide by EU single market regulations covering all manner of goods, including food imports.

This effectively placed a customs border in the Irish Sea and means goods exported from Great Britain to Northern Ireland have to meet EU regulations and tariffs where applicable unless the two sides can agree alternatives.

Under EU rules governing food safety, to which the UK was party until 1 January, processed meats cannot be imported from outside the union.

A Downing Street spokesman said: “There’s no case whatsoever for preventing chilled meat from being sold in Northern Ireland.

“We think an urgent solution needs to be found

“We have not heard any new proposals from the EU.

“We have sent more than 10 papers to the Commission proposing potential solutions on a wide range of issues and we’re yet to receive a single written response.”

The Federation of Small Businesses in Northern Ireland called on both sides to end the public posturing and work on practical solutions in order to protect jobs and livelihoods.

“This gets boiled down to a single issue like whether British sausages can be sold in Northern Ireland, but there are around 30 issues the negotiators need to deal with, everything from VAT on second-hand cars to pot plants and moving pets around,” said Tina McKenzie, chair of the FSB’s Northern Ireland policy unit.

“We knew there would be issues to work through as a result of Brexit but we are now more than six months on.

“The two sides need to stop talking to their own sides through newspaper articles and get on to the closed-door diplomacy to deliver practical solutions.”